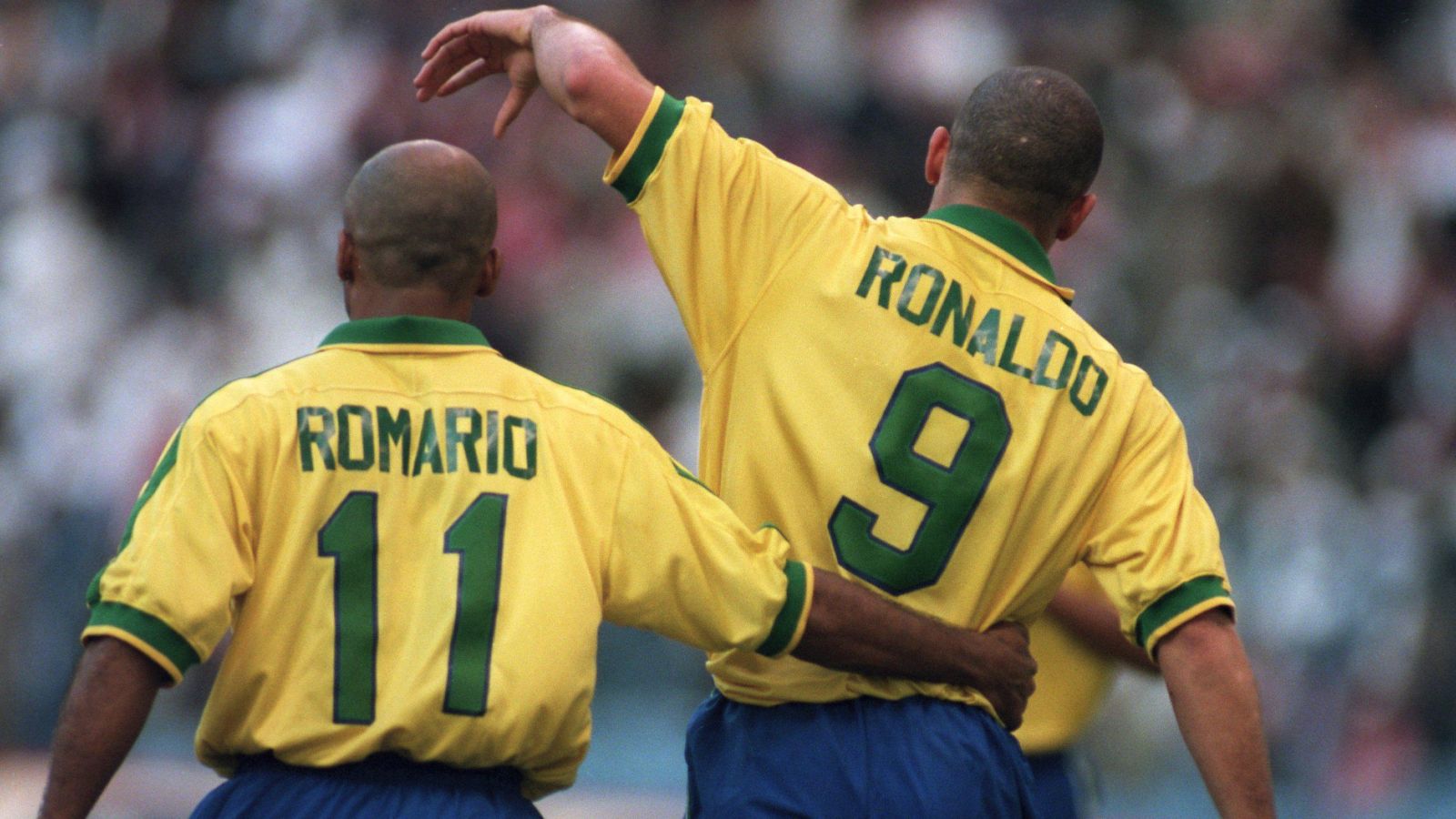 For me and, I imagine, for many of those taking the time to read this, few things in life are as heart-warming as a fully functional strike partnership.

Forward duos come in many shapes and sizes, but all share one key element: two players acutely aware of their reliance on one another – their coordinated movements, lay-offs and interplay – for the goals that put food in their stomachs and joy in their hearts.

And for those of us fond of the attacking double act, the 1990s were extremely kind. Sutton and Shearer, Yorke and Cole. Look to Serie A and you might have glimpsed Inzaghi and Del Piero or Crespo and Chiesa. At international level there was Klinsmann and Bierhoff or Bergkamp and Kluivert.

But divert your glare a little further afield and there was a double-act to blow all others out of the water.

It was fleeting and, as a national team partnership that never went to a World Cup, often overlooked. Yet Ronaldo and Romario, for a single calendar year in 1997, obliterated all that was put ahead of them. Less big man-little man, more genius-phenomenon.

In a veritable splurge of international fixtures, Brazil played 26 times in the year, of which Romario and Ronaldo started 16 together. In those 16 matches, the Selecao scored 52 goals, 31 coming from the Ro-Ro front two. There were three assists from Rom to Ron and nine from Ron to Rom. And, propelled by that debauched, hedonistic spree of goal-scoring, Brazil lifted two trophies in six months.

After the 1994 World Cup win, Romario had spent two and a half years out of the national team picture as manager Zagallo looked to blood youngsters for 1998. In the meantime, Ronaldo had gone about establishing himself as the team’s first-choice striker. When Romario returned in February 1997, it did not take long for master and apprentice to hit it off.

The first unfortunate victims were Poland, who travelled to Goias in the west of Brazil on what one can only imagine was a debilitatingly hot summer night. Their reward for their intrepidness was to be swept aside by a 20-year-old in the sweet spot of the season of his life.

Just a few minutes in, Ronaldo picked the ball up in the centre circle and threaded an inch-perfect ball through to his Barcelona team-mate Giovanni, who did the rest. Then, after Giovanni had bagged a second, O Fenomeno added two of his own. For both, Romario dropped in to be the provider, laying on two one-on-ones of the sort Ronaldo did not miss.

The next appointments were in April, Brazil playing decent opposition in Chile and Mexico. No bother – two games; 4-0, 4-0. Two goals for Ronaldinho (as Brazil’s No.9 was known before the emergence of his buck-toothed namesake), five for Romario.

Each goal added weight to the case that the pair were two of the best in the world individually, but Brazil’s second against Chile and fourth against Mexico were the proof of how well they gelled.

Against Chile, Ronaldo ran powerfully into the channel, crossed perfectly, and O Baixinho rose above the defence to head home. Versus Mexico, Ronaldo won the ball back high up and slotted through and inch-perfect pass for his partner to score.

In May, the pair tasted defeat for the only time, succumbing 4-2 to the might of Tore Andre Flo’s Norway. Still, Romario did manage a stunner to give Selecao fans something to shout about.

That game was a warm-up for the Tournoi de France, in itself a warm-up for the World Cup to be held the following year. England won, collecting six points from their three games, but the real stars wore yellow and green.

Roberto Carlos sent that free kick swerving past Fabien Barthez, and Romario and Ronaldo each scored magnificent goals to rescue a 3-3 draw against Italy. To seal victory over England in the last game, Romario beat the moustachioed, centre-parted David Seaman with a trademark toe poke after a delightful, inimitably Brazilian passing combination involving Ronaldo and Leonardo.

Brazil won their next two group games, scoring five, and their quarter-final (two goals for Ronaldo there), but for the more neurotic elements of the Brazilian media and support base, that was inexplicably not enough.

Brazil, apparently, were not creating enough chances. It was a “crisis”; Zagallo was “stupid” and if he did not bring home the Copa, something the Selecao had never done outside Brazil before, he would be gone.

The semi-final saw them face Peru, who had already beaten Uruguay and Argentina en route. Worried? Under pressure? Zagallo’s men provided the answer: Brazil seven, Peru nil. Two of them came from Romario and though Ronaldo did not score, he again showed his credentials as a creator, threading a perfect ball for his partner’s second.

Towards the end, Romario pulled up, holding his hamstring. At first glance it was routine; he overstretched as he ran onto a pass. As it was their ninth game in 28 days, it was hardly a surprise.

Yet Zagallo, who never hid his dislike of Romario, bizarrely accused him of faking the injury and barred him from the squad for the final. Brazil won 3-1 to take the trophy, with an obligatory Ronaldo beauty, but Romario was omitted from the squads for friendlies in August, September, October and November.

For the Confederations Cup, though, Zagallo’s desire to win outweighed his hatred of the partying, shit-talking, goal-scoring Valencia striker. Romario was back.

The partnership was restored for the opening game versus Saudi Arabia and they continued where they had left off, Romario scoring twice with the second set up by Ronaldo. Bebeto replaced Romario for the next tie with Terry Venables’ Australia and Brazil failed to score. O Baixinho’s importance was highlighted in his absence.

READ: A celebration of Romario at Barcelona: Football, flights and f*cking

In the last group game, Brazil sealed a semi-final place, where they would face the Czech Republic, by beating Mexico for the third time in nine months, a penalty from Romario giving them the first of their three goals.

In the semi, Ronaldo and Romario both put the ball past Pavel Srnicek from close range to set up a final against Australia, who had held the Selecao to a draw a week before.

With Romario and Ronaldo together this time, there was no stopping the Selecao. Ronaldo battered the ball past Mark Bosnich after 15 minutes and scored a superb second soon after, barging two Australians out the way before guiding the ball delicately into the corner. When Mark Viduka was sent off for wildly lashing out at Cafu, Australia’s tournament was done.

Romario made it three before half-time and Ronaldo set him up for the fourth just after the break. O Fenomeno made it five with another masterpiece on the hour mark, taking a long ball on his chest before lashing it in, and Romario converted a Ronaldo-won penalty to complete the rout 15 minutes from time.

A hat-trick from each of their superstar front two three days before Christmas and Brazil received the gift of becoming the first country to simultaneously hold the Confederations Cup, World Cup and their continental crown.

Unfortunately, owing to injuries and Zagallo’s fractured relationship with Romario, the pair that delivered that undisputed heavyweight title would only be seen together on the pitch on three further occasions.

Romario suffered another hamstring strain in run-up to the World Cup (this time a scan confirmed it was real) and, despite his insistence that he would be fit, Zagallo left him out of the squad.

Romario broke down crying in a press conference called to discuss the decision, and two days after Brazil’s quarter-final win over Denmark, he scored for Flamengo in a Brazilian league match, proving his fitness. But by then it was too late.

Bebeto partnered Ronaldo in France and Brazil made it to the final. But, given what happened on that evening in Paris and how great the Ro-Ro attack was the year before, Romario’s absence from that tournament remains one of Brazilian football’s great question marks.

READ NEXT: Edmundo & Romario: The brilliant strike partners who hated each other