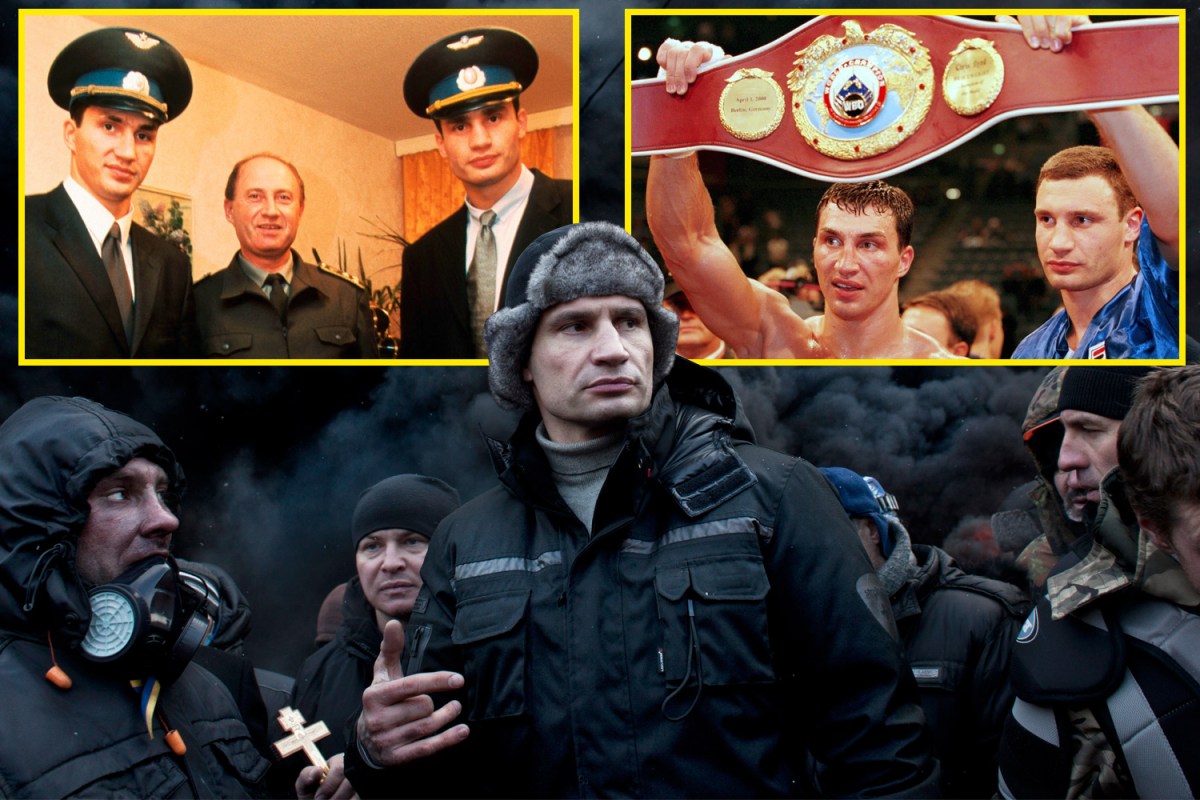 Vitali and Wladimir Klitschko, the former world heavyweight champions in Ukraine helping resist the invasion by Russia, have overcome so much in life that it’s no surprise to see them unflinching in their current roles.

The brothers survived Chernobyl and grew up behind the Iron Curtain, before their boxing success took them to global stardom, from fighting in packed football stadiums in Germany to headlining Madison Square Garden. Now they both find themselves on the reported ‘kill list’ of 24 Ukrainian targets the Kremlin has said that they want dead.

Neither Klitschko is going anywhere. Vitali, who retired from the ring in 2012, has been the mayor of capital city Kyiv since 2014. Wladimir signed up for Ukraine’s territorial army a month before the invasion began, when 100,000 Russian troops massed on the country’s border. He’s since been joined by current pound-for-pound stars Oleksandr Usyk and Vasyl Lomachenko.

Yet the Klitschko brothers’ journey is unique. Their father, an air force colonel, was one of the first people called in to help clean up the Chernobyl nuclear disaster site in 1986. His young family lived 60 miles from the accident site. “The military vehicles and helicopters came back here to be washed down,” said Wladimir in ‘Klitschko’, the 2011 documentary film. “All of the radioactive water flowed into huge pools – and I played in those pools with my paper boats.”

Tragically, their father died at the age of 64 of a cancer almost certainly caused by Chernobyl. But at least he got to see his two tall, formerly skinny sons – who were obsessed with Bruce Lee and Arnold Schwarezenegger as boys – reach the top of the heavyweight mountain. Vitali’s first loves were kickboxing and karate, and he won international medals in kickboxing competitions, racking up a 34-2 win-loss record.

Switching his focus to boxing, Vitali turned pro in 1996 and the 6ft 7in behemoth won a version of the world title in London three years later when he demolished Herbie Hide in two rounds, taking his record to a not-too-shabby 25-0 (25 KOs). Wladimir followed his brother’s footsteps into boxing but later said it was mainly so he could travel to amateur tournaments and see a world outside the Soviet Union.

Wlad was blown away by his first trip to a US shopping mall, walking around in shock at all the different types of – you guessed it – cheese. “It’s madness. How can there be 100 types of cheese?” he later recalled. “There’s only one type of cheese… It’s called ‘cheese’.” While the now gorgonzola-powered Wladimir may not have had his brother’s innate love for fighting, he was actually the more stylish boxer and won an Olympic super-heavyweight gold medal for Ukraine in Atlanta in 1996.


‘What will be done about it?’ – Anthony Joshua reacts to Taylor vs Catterall

Wladimir turned pro later that year and while the pair went on to astonishing success – no set of brothers in boxing can come close to their combined 40 world title defences – both had to overcome remarkably different challenges.

Vitali suffered his first loss in 1996 and endured being called something he’d never be labelled again: a quitter. The heavyweight pulled out of a fight he was winning, against Chris Byrd in 2000, when he seriously damaged his shoulder (a torn rotator cuff) after nine rounds. To Vitali, boxing was a sport and there was no stigma to stopping with injury – but he was stung by the criticism, particularly from the US, that a fighter simply didn’t go out like this. His mindset changed.

After five comeback wins he stepped in as a late replacement against genuine, linear world champion Lennox Lewis in 2003 and showed his steel. In a six-round slugfest where he wobbled Lewis several times, Vitali was badly cut by a punch but begged for the fight not to be stopped, protesting the decision loudly with blood streaming down his face like a scene from a Rocky film.

The ageing Lewis wisely chose to retire rather than take on the rematch and Vitali never suffered another professional defeat. He won the vacant title and across two spells (interrupted by a four-year retirement caused by injuries) he won 13 fights to finish with a career record of 45-2 (41 KOs), still dangerous when he retired for good at age 41.

Like his brother, Wladimir looked like a sculpted, cold-eyed adonis and boasted serious knockout power. But appearances can be deceptive. Vitali was iron-chinned – he was never dropped in his pro career and his only defeats were by an injury and a cut – while Wladimir was more vulnerable. He was stopped in four of his five career losses as he racked up an incredible 64-5 (53 KOs) record.

However he was a more fluid boxer with remarkable, balletic footwork for a 17-stone giant (as David Haye could tell you). Teaming up with the great American trainer Manny Steward in 2004 helped hone Wlad’s skill, confidence and he finally fell in love with the sport. From late 2004 to meeting Tyson Fury in 2015, he went on an 11-year, 22-fight unbeaten run, the vast majority of them with Wlad as the heavyweight No 1. He became a huge attraction in Germany, where his ring entrances were cinematic blockbusters accompanied by the Red Hot Chili Peppers’ ‘Can’t Stop’.

An appropriate choice as Wladimir, like his brother, fought on until age 41. After Fury withdrew from their rematch, the younger Klitschko had a back-and-forth war with Anthony Joshua at Wembley in 2017, knocking AJ down in the sixth before being eventually stopped in the 11th. He received a hero’s farewell from the 90,000-strong London crowd.

By this time, Vitali was already mayor of Kyiv, part of a political movement to modernise Ukraine. “I remember the Soviet Union and when the Iron Curtain fell down in 1991,” he told the Guardian. “I was just 20 years old and everybody had a dream to live in a modern democratic society, in a modern country. More than 15 years passed and nothing changed. There’s a saying I like very much: if you want a thing done well, do it by yourself.” No wonder Vladimir Putin, who hates that Ukraine has become a more westernised country, has targeted Vitali Klitschko among others.

A 50-year-old, former heavyweight champion nicknamed ‘Dr Ironfist’ being mayor of Kyiv during an invasion might sound like the plot of a film from a Schwarzenegger film itself. But the horrors of what’s happening in Ukraine are all too real. At least two ex-boxing brothers, with power and global influence, have enough experience of overcoming life’s worst setbacks to stand up to this grim reality with the same qualities they always brought to the ring: integrity, discipline and courage.