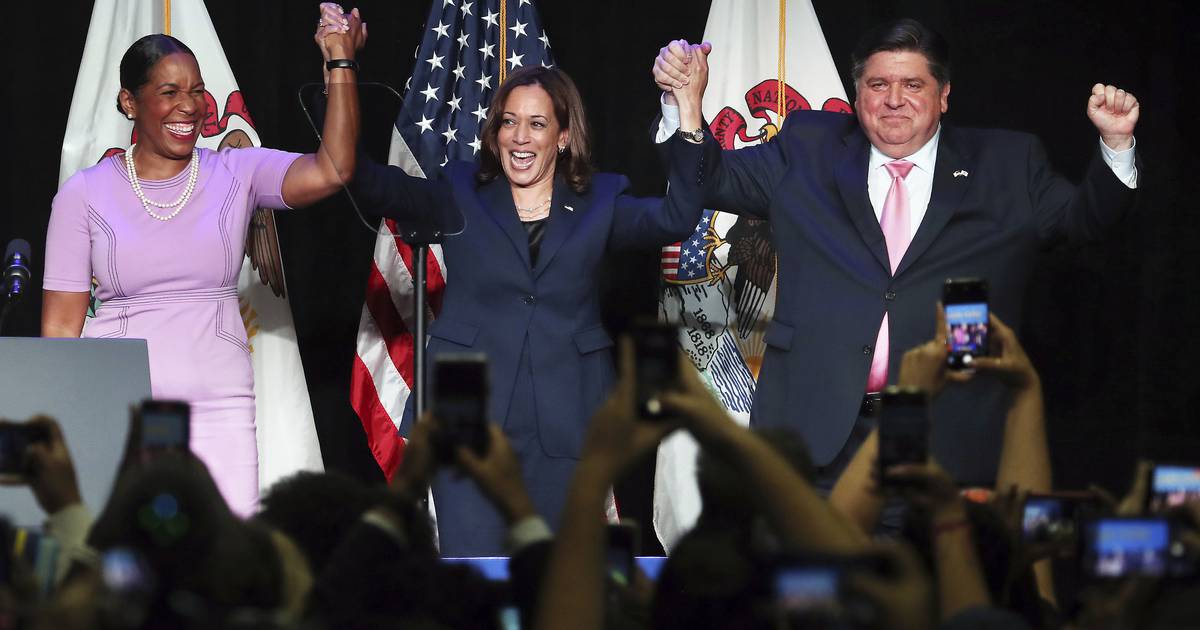 Less than two months before the midterm elections, Vice President Kamala Harris rallied a welcoming crowd of abortion-rights supporters in Chicago on Friday where she heralded Illinois Democrats for playing key roles in pushing for reproductive rights and pushed voters to make their voices heard on Nov. 8.

Harris’ appearance in Chicago — her second in a little more than two months — came as two national political issues took on local importance. On Thursday in neighboring Indiana, a near-total ban on abortions took effect, and, in just the past two weeks, Republican Gov. Greg Abbott of Texas has had migrants who crossed the border into Texas bused to Chicago and other cities to the north, including near Harris’ residence in the nation’s capital.

“Elections matter,” Harris said prior to the rally during a roundtable meeting on the campus of the University of Illinois at Chicago, where she was joined by abortion providers and advocates. Others who joined Harris were Illinois Gov. J.B. Pritzker and Attorney General Kwame Raoul, two Democrats seeking their second terms in office in November, as well as Chicago Mayor Lori Lightfoot, who is seeking reelection in the municipal election early next year.

Democrats in Illinois are hoping a voter backlash against the U.S. Supreme Court decision overturning Roe v. Wade will buttress their prospects up and down the ballot this fall as Republicans continue to try to make headway by hammering the state’s dominant party over issues of crime, a precarious economy and political corruption.

Before the court’s abortion ruling, many nationally viewed it as almost automatic that the GOP would take make inroads with the midterm elections. But following the ruling, Democrats have tried to seize on the abortion rights issue as a way to build support.

“Here’s the good news,” Harris said told a crowd of about 600 gathered at the UIC Forum for a campaign rally that followed the roundtable. “We have momentum on our side.”

Harris noted the recent overwhelming rejection by voters in Kansas of a proposed amendment to that state’s constitution that would have allowed lawmakers to place new restrictions on abortion.

“The people there joined together and protected reproductive rights in their state. They said, ‘We’re not having that.’ We know that we stand with the majority of Americans in saying that we need to stand up for that basic, fundamental right,” Harris said, also touting Democratic victories in special elections for congressional seats in Alaska and New York.

“From now until Nov. 8 it is up to all of us to build on the momentum, and over these next 53 days, let us say, ‘If you believe in the promise of America, if you believe in freedom, equality, justice, then vote for Democrats.’”

During the rally, Harris called Pritzker’s opponent, Republican state Sen. Darren Bailey of Xenia, “one of the most extreme anti-choice candidates in the country,” and Pritzker said those in attendance must help elect candidates who support reproductive rights, union rights, civil rights and other core Democratic principles.

“To all the right-wing officeholders who have been cheering on the Jan. 6 insurrectionists, making it harder to vote, lauding the Supreme Court for taking away reproductive rights and rallying behind a national abortion ban, we are coming for you,” Pritzker said. “Anti-choice, MAGA Republicans, you will lose in November.”

Left largely unaddressed, at least publicly, was the recent arrival of migrants sent without warning to Chicago and elsewhere around the nation, including to near the U.S. Naval Observatory in Washington, home to the vice president’s official residence. Abbott and other Republican governors have gotten migrants to travel north as they blame the Biden administration for lax immigration policies they say have encouraged migrants to cross the nation’s border.

Pritzker on Wednesday issued a disaster proclamation to help access federal resources to aid the asylum-seeking arrivals and announced he’d activated 75 Illinois National Guard members to provide logistical support. But the governor and Lightfoot also have called on federal officials to act because local resources will eventually run out.

Illinois Republicans weren’t ignoring the issue, however. The Illinois Republican Party sent out a fundraising email during Harris’ visit that criticized the vice president for coming to Illinois for a political rally rather than visiting the southern border.

“Kamala Harris would rather campaign for her Democratic friends than protect our nation from an overflowing border,” the state GOP said, before asking supporters to “pitch in to reject Kamala Harris and hold her accountable.”

Lightfoot made a passing reference to immigration issues during the abortion discussion. She compared the city’s policy of not cooperating with federal immigration authorities to her executive order and proposed ordinance barring Chicago police and city agencies from cooperating with out-of-state authorities investigating people who travel to the city for an abortion.

“I believe in concrete, tangible actions, and that’s what we’ve done,” Lightfoot said.

On abortion, Harris praised Pritzker and Lightfoot for protecting the status of Illinois and Chicago as a safe haven for people seeking reproductive health care as surrounding states restrict access.

“I look at what’s happening in Illinois, governor, and you all are, without any question, being stretched thin, in terms of your health care resources going directly to your constituents, but to neighboring states as well,” Harris said.

Pritzker, who has made his support for abortion rights a central theme of his reelection campaign and has tried to position himself as a national leader on the issue, vowed that Illinois will continue to protect access to abortion for its residents and those from other states.

“Indiana recently decided that women are not to be trusted to make decisions about their own health care,” Pritzker said. “It’s despicable. It’s misogynistic, and there’s no doubt that our nation is headed down a dangerous spiral where a radical few dictate who does and doesn’t have rights. But here in Illinois, we will not go backwards.”

Abortion is already protected as a “fundamental right” under state law through legislation Pritzker signed in 2019, but aside from increasing Medicaid reimbursement rates, the state has yet to take any major action since the Supreme Court decision came down this summer.

After immediately saying he would call a special legislative session on abortion, Pritzker has tried to tamp down expectations for swift action. Late last month, he said lawmakers were “hard at work” on a proposal to address issues such as allowing nurse practitioners and physician assistants to perform abortions and expanding legal protections for patients and health care workers.