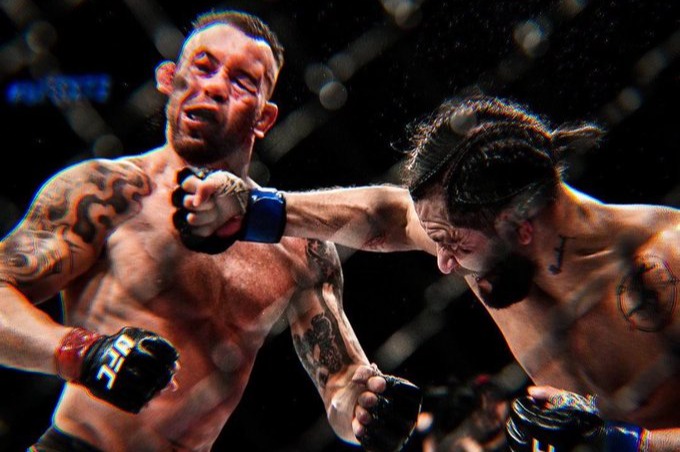 Colby Covington is ‘not good’ after the public attack from rival welterweight Jorge Masvidal, according to former UFC star Chael Sonnen.

Sonnen, who has a good relationship with Covington, posted a video on Twitter about the incident on Friday.

“Not good. Guys keep asking me how is Colby doing. I’m gonna be very light on details; this is not my story to tell. You want an answer? There’s your answer – Not good.”

Masvidal was arrested for attacking Covington at a steakhouse in Miami last Monday night.

It’s been reported that Masvidal was able to track down on Monday and he snuck up on Covington to sucker punch him twice in the face.

Covington suffered a broken tooth and damage to his $90,000 Rolex watch. As a result, Covington pressed charges and “Gamebred” was arrested and charged with aggravated battery with bodily harm and criminal mischief.

If found guilty, the 37 year old could face up to 15 years in prison and/or a $10,000 fine for second-degree felony aggravated battery with additional penalties possible from the accompanying criminal mischief charge.

In the first degree, the potential penalty is as much as 30 years.

There was already plenty of bad blood between Masvidal and Covington prior to their clash at UFC 272 earlier this month which Chaos ended up winning in comprehensive fashion after Masvidal couldn’t deal with his wrestling.

The pair used to be best friends and even lived together during their time as teammates at American Top Team. They regularly cornered each other and were considered close before Masvidal believed Covington didn’t pay their cach properly and that would leave to Covington leaving the gym.

However, in the build-up to their fight, Covington brought Masvidal’s kids into the trash-talk and not only Gamebred, but the vast majority of the MMA community felt that was a step too far.

Khabib Nurmagomedov has already slammed Covington for pressing charges against Masvidal believing the welterweight should have been prepared to back up his words after he insulted Masvidal’s family.

“If you are stronger than someone inside the octagon, it does not mean you can insult his children. No one has the right to insult someone’s family,” Khabib said.

“Once you have gone down that path, then be ready to back up your words. You were attacked by professional fighter, the same as you are, your own size, and you go press charges against him to the police?”

Covington is yet to say anything publicly about the attack and considering he normally has something to say about everything, that’s probably indicative in and of itself.