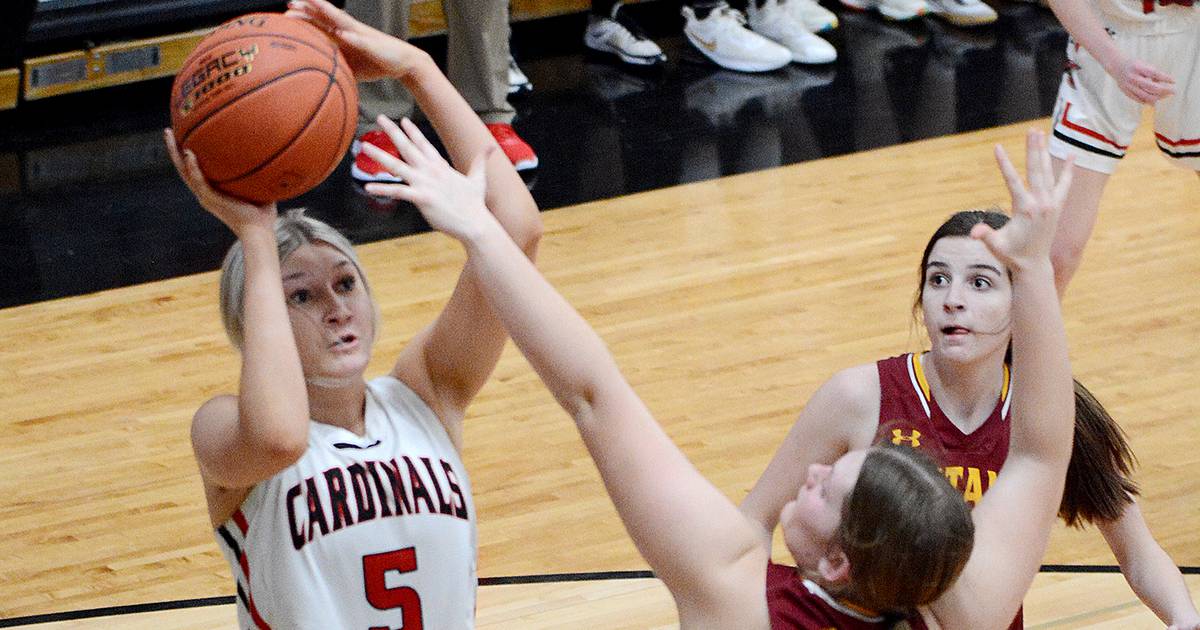 Newton girls basketball coach Eric Vander Velden said there was no external conversations from the coaching staff to the players about the Cardinals’ pre-Christmas game loss to PCM last year.

But Audrey Rausch had the game on her mind during this year’s home contest.

“There was some motivation,” Rausch said. “We were up the entire game last year and let them come back. It felt good to win this year.”

Rausch was a big reason the Cardinals rallied past PCM’s girls basketball team on Monday night. Her career-high 18 points guided Newton to a come-from-behind 43-28 victory.

The Cardinals trailed by one at halftime but used an 11-0 run in the third quarter to down the Mustangs in a non-conference contest.

“We needed make our layups and rebound better. When we started doing those things, we got a little separation,” Rausch said. “We all have to play a lot harder. We all want to win so playing harder is something we can just do.”

Newton had only six players available for last year’s game. Rausch and Rori Nehring were two of those six who played in the game and they led the Cardinals to the win this time around.

But PCM (6-12) controlled much of the first half. Emily Foster scored the game’s first four points and the Mustangs led 9-4 following five straight.

Nehring and PCM’s Paige Steenhoek traded 3-pointers in the final minutes of the quarter and PCM led 12-7 after one.

The two teams went back-and-forth during the first part of the second frame. And a 3-pointer and layup by Rausch gave the Cardinals their first lead of the night.

Addison Steenhoek made a pair of free throws with 1:52 to play in the half to give the Mustangs a 20-19 advantage at the break.

“We played a great first half. We rebounded exceptionally well,” PCM assistant coach Jason Stock said. “We were just flat in the third and couldn’t get over that.”

Stock, who was filling in for head coach Sami Allison because of COVID-19 protocols, said the third quarter has been a nemesis for PCM all season.

It once again bit the Mustangs as Newton used an 11-0 run to grab momentum.

Riley Johannes scored the first bucket of the second half to put her team up three, but Rausch and Nehring took over for Newton.

The Cardinals’ two most experienced players scored 10 of the 11 points during the run and the Cardinals led 30-22 after three.

“Coach Sam always says it’s a game of runs,” Stock said. “They had their run and we expected to get our run going in the third, too. It just didn’t happen.”

PCM got buckets from Sophia Steenhoek and Foster to open the fourth, but Newton countered with an inside hoop by Kealey Manning and back-to-back baskets in the paint by Nehring.

The only other basket in the fourth for PCM came from Foster, but Newton (3-12) closed out the win at the free-throw line. Rausch hit two with 1:44 to go, Manning made a pair with 1:10 to play and Emma Rogers canned 1-of-2 after Rausch converted a layup to finish it off.

“We executed our offense better in the second half,” Vander Velden said. “We reversed the ball and got the ball down low. We missed a lot of inside shots in the first half.”

Rausch and Reynolds both were limited in the first half because of fouls. Vander Velden switched defenses to a 2-3 zone because he needs those two on the floor, especially with point guard Kya Butler missing games due to injury.

Rausch picked up her fourth foul late in the third. Reynolds got two quick ones in the second. Manning also was whistled for two fouls in the first.

“Audrey and Sophia got into foul trouble so we had to switch to the 2-3 zone, and I think that helped,” Vander Velden said. “With Kya being out, we need Sophia and Audrey on the floor.”

“(Rori) is our senior leader. This is the end for her. She’s starting to step it up,” Vander Velden said. “The seniors really stepped up for us in the second half.”

The Cardinals shot 38.6 percent from the floor, made 2-of-7 from long range and connected on 7-of-15 from the line.

Newton turned the ball over 23 times but out-rebounded PCM 32-23.

PCM freshman Addison Steenhoek came into the game having scored 20 and 19 points in her last two games. She was held to nine with only one bucket on Monday. She was 7-of-10 from the foul line and added three rebounds, three assists and three steals.

The Mustangs shot 23 percent from the floor, made 1-of-13 from long range and connected on 9-of-13 from the line. PCM committed 30 turnovers.

“Give credit to Newton. They are taller than we are and that kind of created some problems for our girls,” Stock said. “They all have the green light. They just need to have more confidence. We won’t tell them not to shoot. We couldn’t get the ball inside then back out like we wanted to.”

Notes: The loss snapped PCM’s two-game win streak but the Mustangs have won three out of four after downing Greene County at home on Tuesday. … The win for Newton ended a four-game skid. … PCM’s Riley Johannes is the younger sister of Newton girls assistant coach Bailey Johannes. … Stock said PCM head coach Sami Allison was due to return to the bench on Tuesday.