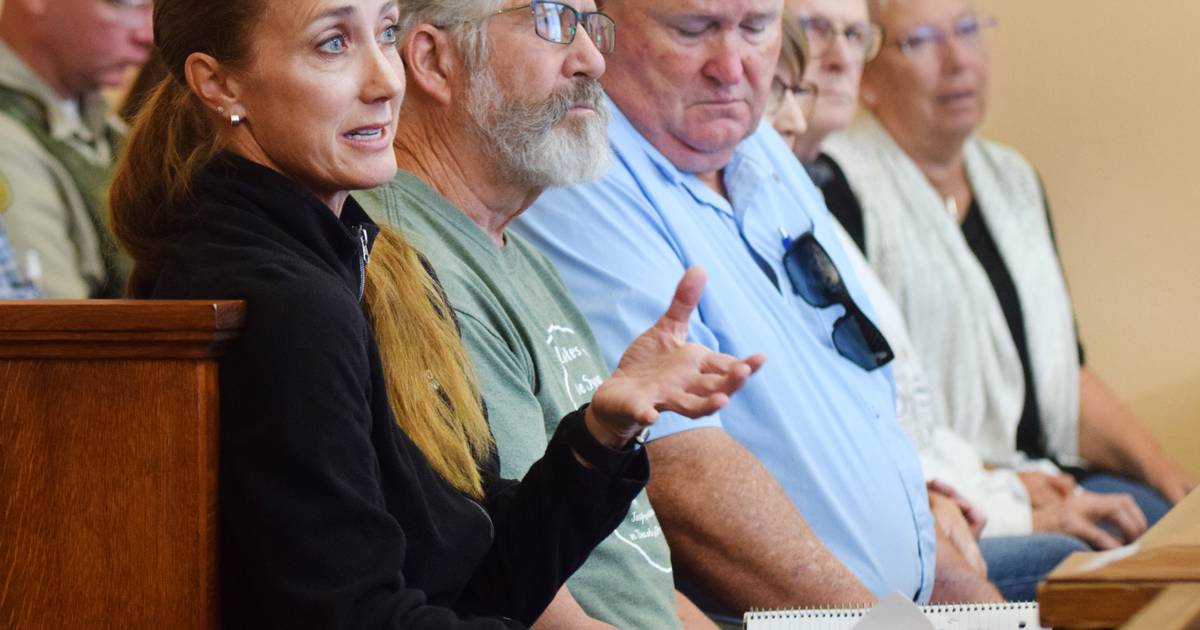 Two of the three conservation projects recommended to the board of supervisors by the county ARPA committee on Sept. 13 were authorized to receive a share of the $7.22 million in federal stimulus money, but officials want a business plan for the environmental education center project before making a final decision.

The committee requested the county allot $450,000 for extensive bike trail repairs on the Chichaqua Valley Trail from 108th Street to Indian Creek Bridge outside Mingo, $400,000 for modern campground additions at Mariposa Park and $400,000 for the proposed environmental education center.

Rather than approve the $1.25 million dispersal in one motion, Jasper County Supervisor Brandon Talsma entertained the idea of having the board vote on each individual project. The board agreed and asked that conservation director Keri Van Zante provide background information on each project.

So far conservation has raised approximately $900,000 in donations for the environmental education center, estimated at $2 million. There are matching ARPA funds available from the state if conservation has 60 percent of the money in-hand. The $400,000 allotment from the county would meet that threshold.

Which would, in turn, allow Van Zante apply for the grant that could pay for the entirety of the project, which is to be in the park of the old county care facility.

Conservation hired a company to do a feasibility study to determine if there was community interest in the project. The study found people were interested in a center that would welcome people to the county and teach visitors about the region’s environment, history and agriculture.

Talsma was hesitant to approve the allotment for the environmental education center, also colloquially referred to as the nature center. He was mainly concerned about the long-term maintenance costs of the facility, such as custodial, building and grounds and snow removal.

“How is that going to be funded year to year to year? Because it was my understanding when you guys first approached Denny Stevenson with this idea several years ago, that was kind of one of the conditions of it,” Talsma said. “It’s gotta be 100 percent privately fundraised.”

Van Zante said it was not a condition, rather it was conservation’s plan to raise the money by themselves “like we do everything else.” Talsma said he’s not opposed to the plan but emphasized his priorities are law enforcement/public safety and keeping the tax levy down.

Van Zante urged the board of supervisors to show continued support for the nature center and conservation if they decide to give the $400,000 allotment, saying her department does a lot of work for the county but it always feels like she is on her own.

“I don’t want to see a big project happen and you’re like, ‘Well we did our thing. You’re on your own.’ Because that’s really difficult. That’s how it is all the time. It feels like we’re scrapping all the time to find money for bike trails or bike trail fixes or park improvements,” Van Zante said.

“But we manage 3,000-plus acres, too. I just don’t want us to be like that. So that’s just me personally saying please don’t make it a project like that because I feel like that happens a lot. And it’s not just in Jasper County it’s in lots of counties for conservation … We’re one of the showcases of the county.”

Chris Herbold, a conservation board member and member of the now defunct-ARPA committee, said the nature center is not just a place to house staff, it is a community building facility that educates children about some of the characteristics of Jasper County: agriculture and the natural environment.

To Herbold, the research park — an element of the nature center — would be a major drawing point and allow people to learn more about commercial agriculture and water quality, among other things. It is an experimental idea that could promote a more farmer friendly message.

It would also have rental capabilities.

When it comes to the sustainability of the center, Herbold said the site would try to be as “off the grid” as possible by using solar panels and other energy efficient techniques like geothermal. Still, Talsma maintained a business proposal would give him more reason to move forward with the allocation.

If Van Zante was not successful in acquiring the grant, she said conservation would continue fundraising. She felt strongly the supervisors’ contribution would signal further support from other donors. Van Zante said some people have not committed because the county has not expressly indicated support for it.

“I feel like this money — the county openly show support for this project — would open up additional local funding for us, too,” Van Zante said.

Talsma said, “I wouldn’t saw the county hasn’t been supportive. I mean, they donated the ground for it.”

Van Zante acknowledged that was a fair enough point but reiterated the attitude she hears from potential donors is: When the county gives money, I’ll give money. With the supervisors supporting the project through a large ARPA donation, Van Zante is hopeful it could push the fundraising to completion.

Regardless, Van Zante agreed to present the business proposal during the Sept. 20 board of supervisors meeting. Talsma said if she can get it to the board next week he will be 100 percent in support of it.

Van Zante said some of the cracks in the Chichaqua Valley Trail are so big that some cyclists have taken pictures fitting their bike tires halfway in the crevices. The repairs are sorely needed. Staff have tried fixing the issue before but found the trail was cracked again, prompting experts to determine the problem.

“It’s a dry issue. Our weather is changing here. We get hotter summers, less rainfall and that seems to be causing deep cracks to occur,” Van Zante said, noting a statewide expert for bike trail construction found similar issues at another trail. “…He suggested taking all the asphalt off this section.”

Concrete with rebar would replace the asphalt and provide a sturdier surface. It is an expensive fix, Van Zante said. But the cracks are dangerous and she is almost wondering whether conservation should even allow people to travel on it. There are markers on the trail letting people know to steer clear.

Jasper County Supervisor Denny Carpenter said there were sections of the trail that went bad in a year. Van Zante corrected him: “Within three months.”

Supervisors largely agreed to the repairs, but under the condition that county engineer Michael Frietsch be involved to make sure the trail is fixed properly. Talsma said the repairs have to happen, whether it is paid for using tax dollars or ARPA funds. The allotment passed in a 3-0 vote.

With the past few years, Mariposa Park underwent a $2 million restoration project. The park has seen a lot of visitors since then after conservation brought it back to its former glory. To build upon its success, conservation proposed more modern campground accommodations be built in the park.

A primitive campground is already in place. Van Zante said the new campground project would include a shower house, utilities, a dump station and about 10 or 20 sites to start with. The ARPA funds would add more sites and potentially a few cabins or yurts, which would provide conservation with a level of income.

“That would complete what our original plan was out there,” Van Zante said.

Talsma was willing to amend the $400,000 allotment and provide no dollar threshold on the Mariposa Park projects, but this was not fully supported by supervisors. However, supervisors were receptive to allowing Van Zante come before the board and request more ARPA money if need be.

Funding the project would also address a goal on the comprehensive plan to provide modern campgrounds to Mariposa Park. Coupled with that, its sustainability through fees and staff giving their own time to build the sites, the board of supervisors approved the allotment in a 3-0 vote.

Another aspect of the ARPA committee’s request was to give the remaining funds to the engineer’s office, which would be decided on at a future meeting.