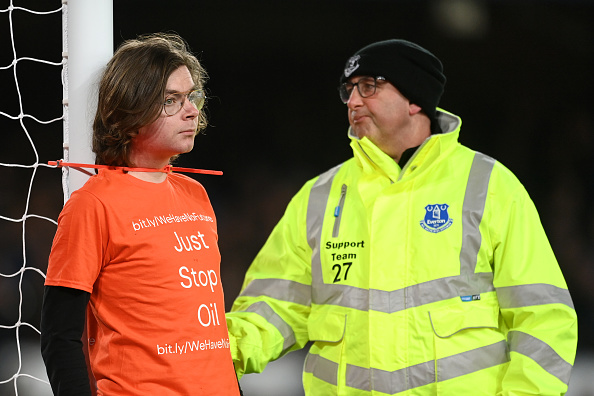 There was a bizarre stoppage during Everton’s Premier League clash at Newcastle after a man tied himself to one of the goal posts.

Shortly after the start of the second half, the man made his way onto the Goodison Park pitch and tied himself to one of the posts at the Gwladys Street End.

After a stoppage of around eight minutes, the man, who sported a shirt with the words ‘Just Stop Oil’ was freed by police and led away from the pitch.

There were unsavoury scenes afterwards as Toffees fans were seen throwing objects at him.

Meanwhile, one fan ran on the pitch in an attempt to attack him. The supporter was apprehended by police before being led away.

Listen to full commentary of Everton vs Newcastle live on talkSPORT now or follow the action on our dedicated live blog.