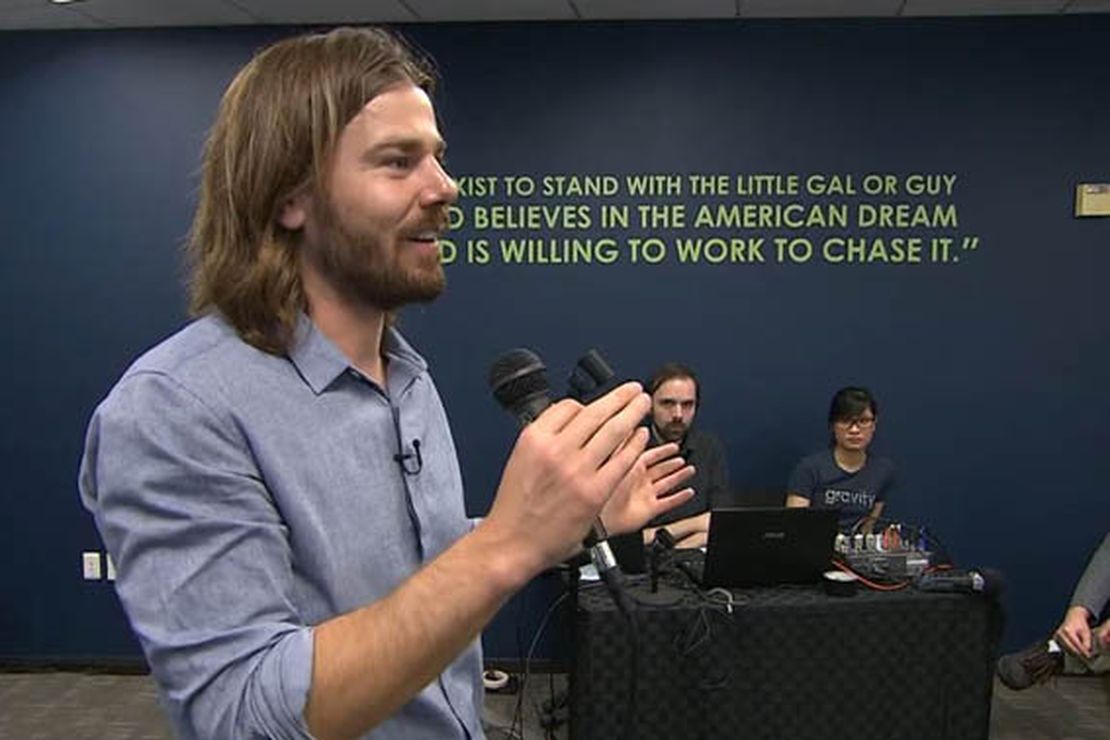 It looks like Jazz first wrote about Dan Price back in August of 2015. Price is the Seattle CEO Gravity Payments who made a lot of news when he announced he’d be paying his employees a minimum of $70,000 each and cut his own salary from just over a million dollars a year to $70,000.

Dan became a mini-celebrity for these efforts. Esquire called him a “folk hero for the age of inequality.”  In a separate story published in 2016, Esquire reported that Price’s background and motive weren’t as pure as it may have appeared.

In a TEDx Talk last fall, Price’s ex-wife, Kristie, claimed he once “got mad at me for ignoring him and grabbed me and shook me… . He also threw me to the ground and got on top of me. He started punching me in the stomach and slapped me across the face.” (The video of the talk was never released, but Bloomberg Businessweek quoted it in a story about Price in December.)…

Price told the table about advice he’d gotten from a friend: “He said rich, selfish people get laid.” Price paused for a moment, then grinned. “But he said socialist leaders get laid, too.”

When confronted about the charges leveled by his ex-wife, Price denied them in a curious way. “The honest truth of it is, there’s only two people on earth that know. You could spend ten years with me and you still wouldn’t know,” he told Esquire. That was eight years ago.

Last week, several news outlets reported Dan Price had resigned his job at Gravity Payments after an allegation of rape:

Kacie Margis, a model and artist, first learned about Dan Price in 2020 the way many people do: through social media posts that celebrated his progressive politics…

After Ms. Margis liked one of his Instagram posts in 2020, Mr. Price, who was 35, messaged her: “Happy Valentine’s Day beautiful!”…

Soon, they were talking regularly. Mr. Price visited her near San Diego and flew her to Seattle. But what started as a whirlwind courtship ended three months later with an accusation of rape.

Eventually, we get Margis’ story of what happened three months into this relationship when Price flew her to Palm Springs for the weekend. It started when he kicked her out of their room to take a call and later found her by the pool. He tried to kiss her and she got up and went back to their room:

Ms. Margis returned to Room 423, where she took a cannabis edible to counter insomnia, something she’s regularly done since being at the 2017 mass shooting at a Las Vegas music festival. Mr. Price returned and tried to initiate sex.

“No, I just took an edible and I’m going to bed,” she would tell the police she said. “We’ll talk about this in the morning.”

As she drifted to sleep, she felt him penetrate her, she told the police. She pretended to be asleep, worried he would kill her if she tried to stop him.

After he finished, she waited a few minutes then walked to the bathroom before confronting him.

“Did you just rape me?” she told the police she said. He flatly denied it, she said…

According to the police report, Mr. Price boasted that no one had believed Ms. Colón’s allegations of abuse “because of who he is and that no one would believe her either.”

After returning home, Margis contacted Price’s ex-wife and told her she’d been raped. The ex-wife put Margis in contact with a blogger named Doug Forbes who’d been writing about alleged fraud with Price’s business. With her approval, Forbes posted an account of Margis’ experience (minus her name) and that led to several other women coming forward. He published anonymous accounts of their experiences as well. Eventually there were more than a dozen women who were in contact with Forbes and with one another.

One of the incidents described in detail by the Times has already resulted in charges. In February, a woman named Shelby Alexandra Hayne met Price at a restaurant where he (allegedly) proceeded to get drunk and then assault her.

The woman allegedly met with Price at a restaurant downtown on the night of Jan. 20. The woman told police Price got “very drunk” at the restaurant, according to documents.

The woman attempted to order an Uber, and Price suggested waiting in his Tesla until it arrived. Once inside his car, Price allegedly attempted to force a kiss on the woman and grabbed her throat when she pushed him away. Documents say the woman told police he became “incredibly angry,” and his demeanor completely changed.

According to documents, Price then drove the woman to a North Seattle parking lot and did “donuts” with his car before attempting to kiss her again.

Price pleaded not guilty to misdemeanor assault charges and reckless driving. A charge of assault with sexual motivation was dropped. After the charges became public, Price mostly stopped posting on his social media accounts. It was the charges in Haynes’ case which convinced Kacie Margis to seek charges in her case.

Perhaps the most interesting part of the NY Times report is that it really doesn’t shy away from the idea that Price used his fame as a social justice campaigner to make contact with nearly all of the women who accuse him of assault. One alleged victim, a left-wing activist, even described it as painful that Price is “the poster child for this politics that I really care about.”