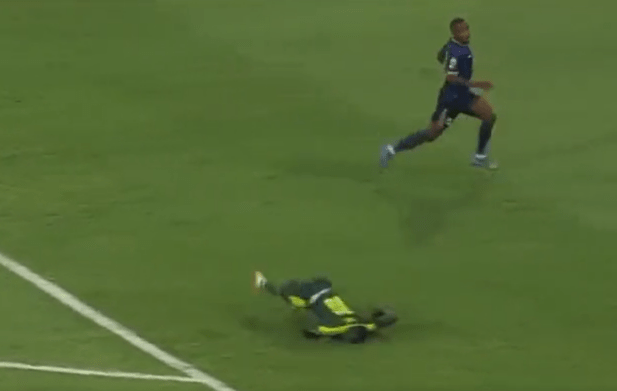 Sadio Mane’s stunning goal sealed Senegal’s place in the quarter-finals of the Africa Cup of Nations as they scraped to a 2-0 win over nine-man Cape Verde.

The Liverpool star’s brilliant curling effort in the 63rd minute gave Senegal the lead in the eventful last-16 clash.

However, there’s controversy over whether Mane should’ve been on the pitch to score the goal having suffered a nasty blow to the head moments earlier.

Mane and Cape Verde goalkeeper Vozinha collided as they chased a 50-50 ball, and both players were left shaken up afterwards.

Vozinha was unsteady on his feet after the incident but too add insult to injury he was sent off for his part in the collision. Mane wasn’t punished and appeared to be okay to continue despite the fact his head hit the ground after the coming together.

He then fired Senegal in front, the goal eventually being awarded after a lengthy VAR check, before being substituted moments later having gone down. Mane’s replacement, Bamba Dieng, scored Senegal’s second in stoppage-time.

Earlier, Patrick Andrade was sent off in the first half for a late tackle on Idrissa Ganag Gueye.