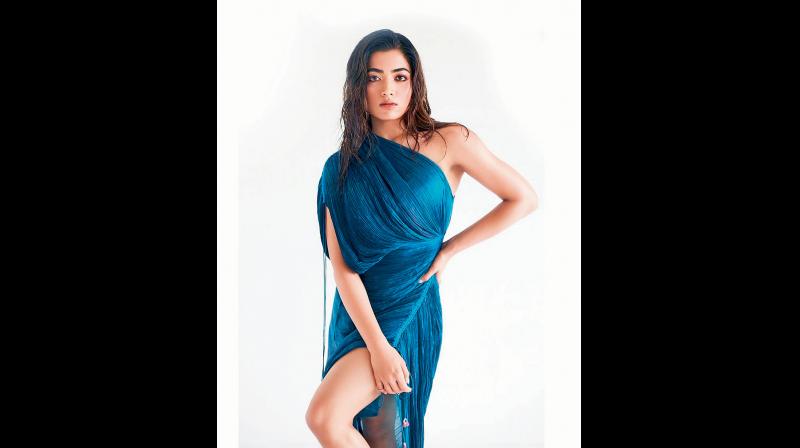 Rashmika Mandanna’s impact even in the de-glam role of Srivalli from the blockbuster Pushpa: The Rise has sent her stock up. Her Saami song has become a rage, clocking over ten million views in less than 24 hours of its release.

“The love I have received for my song Saami Saami is overwhelming. I would like to thank all my fans for making the song so successful and loving me in it. I remember rehearsing for it for long hours to give my best to the peppy number. In the past few days, I’ve been seeing so many of you doing the hook step on social media, which takes me back to the shooting days of Pushpa. All the love I have received from people all over the world just makes the song super special and memorable,” says the actor.

Rashmika was praised for pulling off the choreography in her signature style. Fans and social media users have been replicating the steps from the popular song.

The Bangalore girl reveals that she has watched a great many films. “I lived in a hostel and I used to watch many Hindi films, some out of choice and others because there was no option but to watch what was being played. Now I watch a lot of films to understand things technically and out of personal choice as well,” she says.

“It was tough shooting for Pushpa because we were shooting in the forest. We even had to lay a road to go to the location. The producers did a lot of hard work. I’m really grateful that all the hard work that the cast and crew put into the film, is finally being seen and appreciated by viewers everywhere. This only shows us that the cultural and language barriers are now blurring and fading away,” she says.

Rashmika, who is now known to the Hindi audience, will officially debut in Bollywood soon with two big ticket films — Mission Majnu and Goodbye. She has already bought a house in Mumbai to pursue her Bollywood career.

“Firsts are always special and my first Bollywood film, Mission Majnu, gave me the opportunity to transcend boundaries. My heart feels happy to know that I started my journey in Hindi cinema with this film and with these beautiful people,” says Rashmika who is co-starring with Sidharth Malhotra in the movie.

Next in line for Rashmika is the Amitabh Bachchan starrer Goodbye where she plays a designer. The actress is working hard on her Hindi lines and also working on her diction to ensure that she does not look weak as an actor compared to Bachchan in the Vikas Bahl directorial.

“I have a fabulous team of actors including Amitabh Bachchanji and Neena Guptaji and it was great working with them. They were all so warm that it made it easy working. When you are working together for some time in a good atmosphere, the performances come out better,” smiles Rashmika.