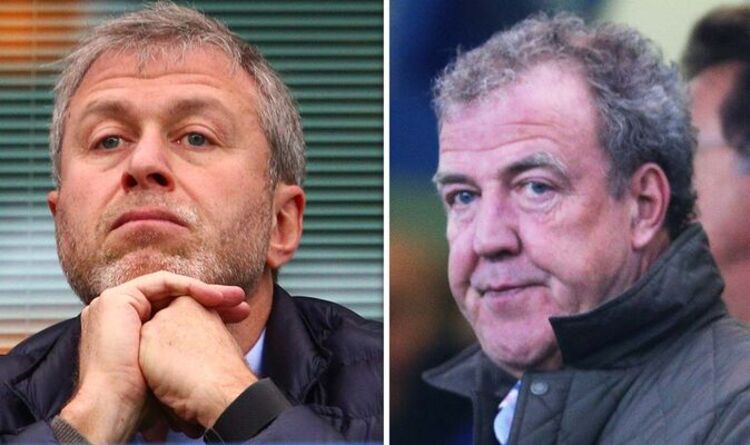 Lifelong Chelsea fan Jeremy Clarkson, 61, has spoken out about the controversy surrounding the club’s owner Roman Abramovich, 55. The Russian oligarch has been sanctioned by the UK Government for his close ties with President Vladimir Putin.

This includes having his assets frozen, a travel ban, transport sanctions and transactions with individuals and businesses prohibited in the UK.

The European Union also imposed sanctions saying that Abramovich’s “privileged access” to Putin had “helped him to maintain his considerable wealth”.

Chelsea fans may be torn following the revelations about Abramovich, but Jeremy Clarkson has made it clear that he will not be trading in his season ticket anytime soon.

In his new column, Jeremy discussed his love for the club and reminisced about the joy he felt when his son, Finlo, decided he would support the team too.

The father-and-son have bonded over their love of the team and have their own ritual at Stamford Bridge which includes meeting before every match and enjoying a “Bovril and a pie”, which at Chelsea Jeremy says is really a “Dover sole and bottle of rosé”.

Jeremy deliberated: “[Finlo] truly loves Chelsea, and I do too.

“Now we are being asked not to love Chelsea anymore because its owner may be entwined with another man who invaded Ukraine.”

The novice farmer asked whether people will “burn everything they ever bought from Topshop now Sir Phillip Green may be a wrong ‘un” or “put Royal Family tea towels in the bin because of Prince Andrew”.

“I’m glad he’s pumped huge amounts of money into it ever since, often spending millions on players just to stop them going to another team,” he penned in his column for The Times.

“But I have no real love for the man, because he’s the general and I’m a foot soldier in the trenches.”

Earlier this month, the Clarkson’s Farm star mocked goal-keeper Kepa Arrizabalaga for a penalty which helped Liverpool beat the Blues at the 2022 Carabao Cup final at Wembley.

In a clip to his 4.6m Instagram followers, he looked to the sky while holding his hands out to catch a ball.

“Kepa’s penalty is coming in… yep there it is! It’s landed, in Norway!”

He quipped in the caption: “Good news. Kepa’s penalty has landed.”