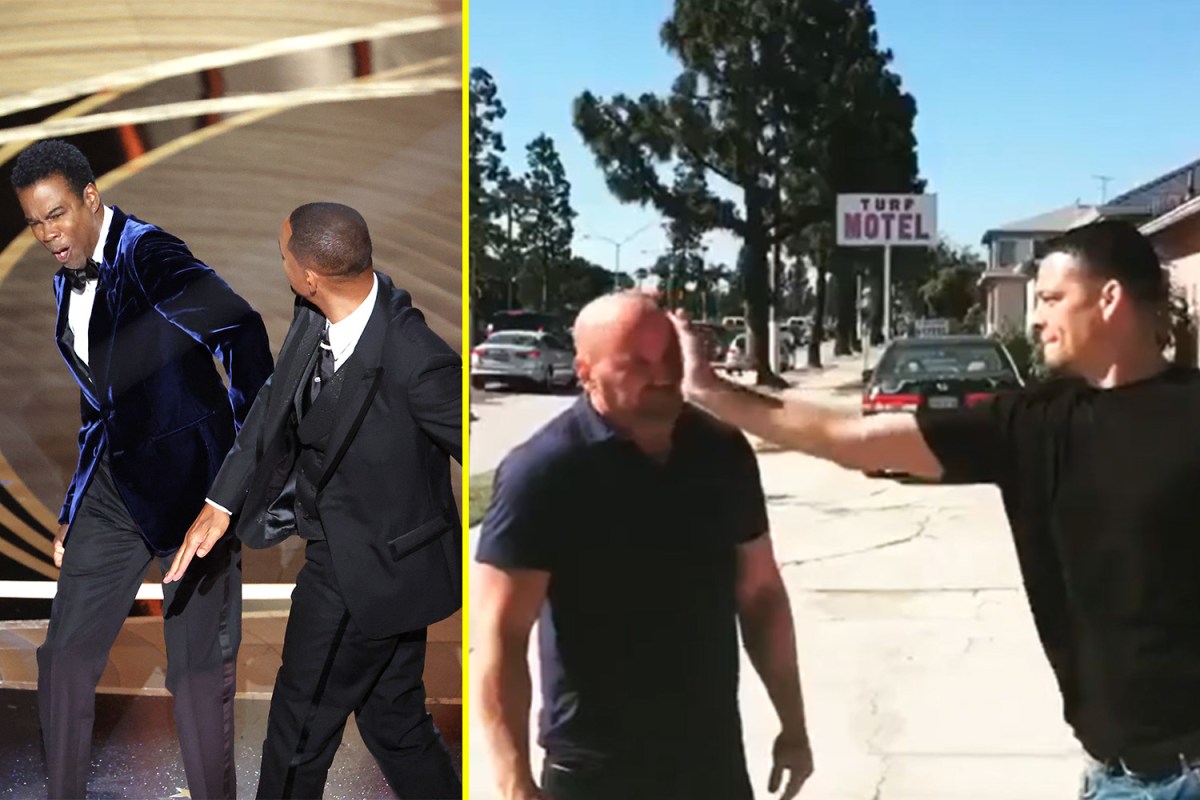 Nate Diaz’s showed Will Smith how to slap as he recreated the actor’s infamous strike on Chris Rock at the Oscars… on UFC president Dana White.

The movie star made headlines for striking comedian and fellow actor Rock, an incident which sent shockwaves across Hollywood and also brought a lot of reaction from the sporting community.

The incident at the 94th Academy Awards ceremony, or better known as the Oscars, came after Rock made fun of his wife, actor Jada Pinkett Smith.

Referring to the buzzcut of Pinkett Smith, who suffers from Alopecia, Rock said: “Jada, can’t wait for GI Jane 2.

Pinkett Smith rolled her eyes but her husband took matters into his own hands and marched on stage to confront the 57-year-old.

He hit Rock before returning to his seat and shouting twice: “Keep my wife’s name out of your f****** mouth.”

Naturally, the incident involving Smith and Rock was the talk of the town and stars of the combat sports world were getting involved.

UFC president Dana White wrote on Instagram: “FINALLY!!!! There’s an Oscar’s show worth watching. AND @chrisrock has a chin.”

Meanwhile, YouTuber-turned-boxer Jake Paul even offered to have the pair settle things in the ring on the undercard of his next fight.

“Let’s do it in August on my undercard.”

And just as the re-enactments were coming towards an end, Diaz took matters into his own hand, literally, by slapping White across his face.

Warning: The video contains very strong language that you might find offensive.

The comedic moment may slap some sense into White after Diaz and the UFC broke down in contract negotiations.

The popular 36-year-old MMA veteran has been wanting to fight for several weeks, and is looking for his next contest ‘ASAP’.

Diaz tweeted on March 26: “I would like to request to be released from the @UFC @DanaWhite @Hunter.

Paul also commented on the situation by taking to the same platform and writing: “Free Nate Diaz”.