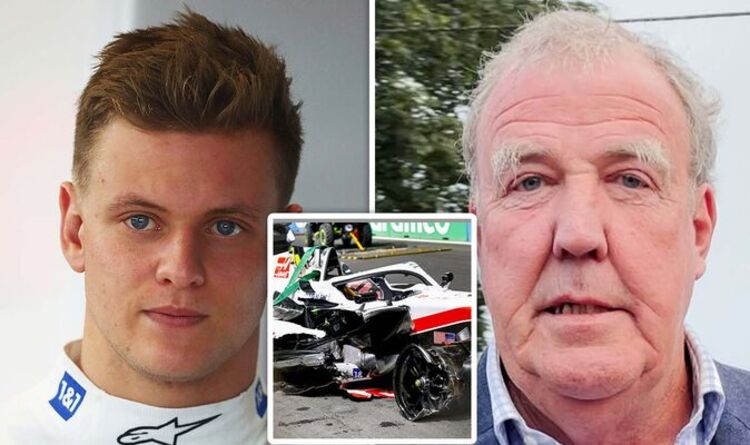 Jeremy Clarkson, 61, took to Twitter to react to the horrifying scenes at Saturday’s Saudi Arabian Grand Prix qualifying which saw Haas’ Mick Schumacher, 23, ploughed into the wall while driving at around 170mph.

He lost control on a kerb and spun into a concrete wall at high-speed.

The care was split in two and Mick was airlifted to hospital.

Luckily, Michael Schumacher’s son was “physically fine”, able to talk and being taken for further scans, as said in a statement from Haas.

On Saturday evening, Jeremy gave his take on the worrying incident in view of his 7.6m followers.

He wrote: “Volvo, it seems, has much to learn from Haas.”

Volvos are considered to be incredibly safe cars, but the fact Shumacher walked away from the heavy impact collision says a lot about Haas vehicles.

Hundreds of users took to the comments to share their own opinions.

Mal said: “That was a nasty crash, was nice to hear young Schumacher walk away ok.”

The 23-year-old shared a smiling selfie of himself still wearing his Haas F1 team jacket.

He confirmed to fans: “Hi everyone, I just wanted to say that I’m ok. Thank you for the kind messages. The car felt great @haasf1team, we’ll come back stronger.”

Despite the fact he came out of the crash unscathed, Haas confirmed that Mick won’t be taking part in Sunday’s race.

The team said on Twitter: “In light of today’s qualifying incident, Mick Schumacher will not participate in tomorrow’s #SaudiArabianGP.”

Haas team principal, Guenther Steiner, also revealed he had spoken with Mick and his mother.

“He has no injuries which you can see – they just wanted to check on him, doing some scans to see that there is no damage from the impact of the forces.

“Taking any risks tomorrow, it’s not on. We are in Melbourne in two weeks and it’s better to focus on that one to make sure that we are in a good state there.”