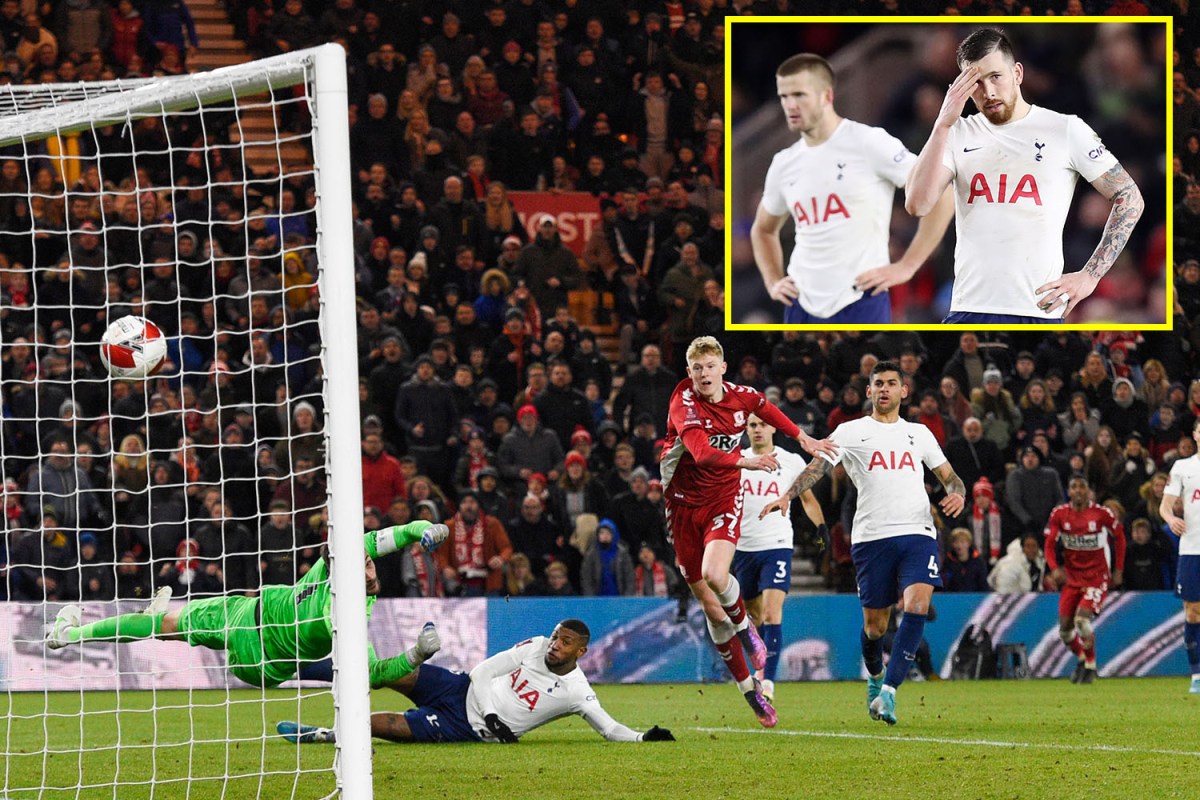 Middlesbrough produced yet another FA Cup exit as they secured a stunning 1-0 win over Tottenham.

Josh Coburn’s emphatic finish in the second period of extra time is all that separated the two sides on a magical night at the Riverside Stadium.

The Championship outfit were the better side throughout, booking their quarter-final spot and ensuring Spurs will end another season without a trophy after an abject display on Teesside.

Who knows how Antonio Conte will react to this defeat as their inconsistency continues to derail any progress and this result could have implications over his long-term future as well as that of Harry Kane, whose desire to win silverware is consistently not met at Spurs.

Only a strong finish in the Premier League and a late surge into the top four can rescue this season, but that looks a stretch on this evidence.

They will have known what to expect following Middlesbrough’s result at Old Trafford and the hosts contained Tottenham throughout.

The visitors’ biggest threat came from the wings as they found space on both flanks. Ryan Sessegnon burst down the left but his cross was intercepted with Harry Kane waiting to tap in and then Boro defender Dael Fry produced a fine tackle to deny Dejan Kulusevski after he surged into the area from the other flank.

It was another break down the right that presented Tottenham with their best chance in the 39th minute as Kulusevski set Matt Doherty free and the Irishman got to the ball before goalkeeper Joe Lumley, who raced out of his net, but his shot at an open goal was wayward and flew over.


Dejan Kulusevski song: What are the lyrics to the hilarious ABBA-inspired chant

Doherty had another chance shortly after but he dragged a shot wide from the edge of the area as Spurs tried to take control.

Boro enjoyed a good start to the second half and should have gone ahead in the 55th minute but Matt Crooks, one of the heroes of the win at Manchester United, put a free header from Jonny Howson’s corner over the crossbar when he should have buried it.

Spurs offered some response, with Eric Dier forcing Lumley into a good save from a 25-yard free-kick before Spurs thought they had taken the lead from the corner.

Ben Davies flicked Son Heung-min’s corner on at the near post and Kane, who had his shirt pulled when making his run, tapped home but the flag went up for a marginal offside call.

Both sides had chances to win it in normal time as Howson headed over from a corner after Isaiah Jones had burst into the box and shot straight at Hugo Lloris, while Son headed an injury-time chance straight at Lumley when he should have scored.

The hosts sensed another upset and had Tottenham on the rack in the opening 15 minutes of the additional period.

McNair fizzed an effort just off target and then Marcus Tavernier found space at the far post but shot straight at Lloris and Spurs survived.

But it was only a matter of time until Boro got their reward and Coburn wrote his name into folklore. He was played in down the right, with Emerson Royal keeping him onside, and fired past Lloris to spark mass scenes of celebration at the Riverside.

It was nervy at the end, with Lumley somehow keeping out a deflected Dier effort, but they held on to complete a famous night.