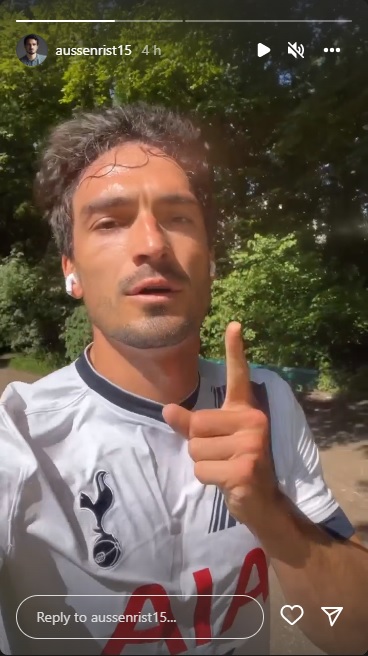 Players swapping shirts with a member of the opposition is part and parcel of football.

But while most stars tend to frame their claimed strips, this isn’t the case for Borussia Dortmund centre-back Mats Hummels as he revealed on his Instagram on Friday.

The Borussia Dortmund defender confused his four million followers after he posted a picture of him donning a Tottenham Hotspur shirt from the 2015/16 season whilst on a run.

Of course, Hummels still has a year left on his contract with BVB.

But that didn’t stop speculation about just why he was wearing the kit.

However, the German soon reassured fans that he was only wearing the shirt to work out in it.

What was even better about his posts, though, was that he knew assumptions of a move to Spurs would come from the video, leading him to joke that there was no hidden message involved.

“And before Transfermarkt and co come up with wild ideas I just like to wear swapped jerseys for sports!!” Hummels wrote on his Instagram story of the shirt he’d been wearing.

In the same upload, the 33-year-old also revealed whose shirt he’d claimed when he’d faced the north London side.

And it was none other than fellow centre-back and Spurs star, Eric Dier.

Dier has missed out on a space in Gareth Southgate’s Nations League squad this month despite a bright end to the Premier League campaign.

But at least his shirt is getting a good run out somewhere else in Europe!