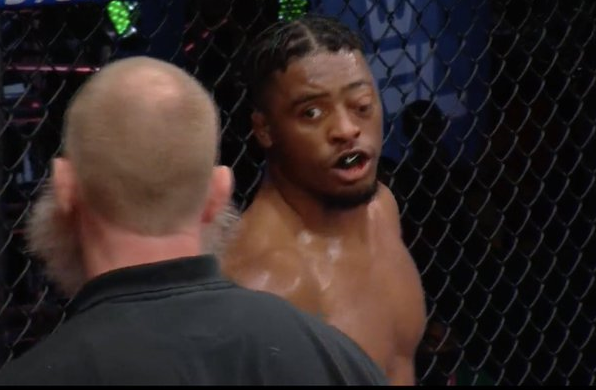 MMA fighter Mark Martin was rushed to hospital with a horrific eye injury suffered during a fight.

The Prodessional Fighters League (PFL) star was fighting Dilano Taylor at Universal Studios in Florida when he was struck with a blow that left his eye bulging out of the socket.

With Martin determined to continue fighting, a doctor saw the injury and stopped the fight between the first and second round of the PFL Challenger Series 2 bout, which was designed to identify the promotion’s top talent.

Martin was in control in the early stages of the fight after landing several blows, however Taylor soon took control after making contact with some shots of his own, leading to swelling around the 28-year-old’s left eye.

It was then that the medical staff intervened stopped the bout, leading to the second defeat of Martin’s career.

After turning to face the TV camera, fans at home could see just how serious the injury actually was.

As a result of the fight being stopped, Martin was sent immediately to hospital where it was confirmed that he had suffered a fractured orbital bone with bleeding around the retina, but didn’t require surgery.

He was made to stay in hospital and missed his flight home due to concerns over cabin pressure, instead having to drive from Orlando, Florida to Phoenix, Arizona.

After returning home, Martin took to social media to reassure supporters that he was okay, but suggested that his MMA career could be over if his eye doesn’t fully recover.

Taking to Instagram, Martin said: “Finally out of the hospital. My phone been blowing up so sorry if I didn’t get back to you yet but thanks for checking in.

“My eye should be good. I have a fractured orbital bone and some blood around the retina so my vision is blurry right now but will return once the blood goes down.

“S*** happens I know what I signed up for. I felt good and thought I won the round but props to him for landing a good shot on my eye.

“Once again thank you for the support, the love, and the hate.”