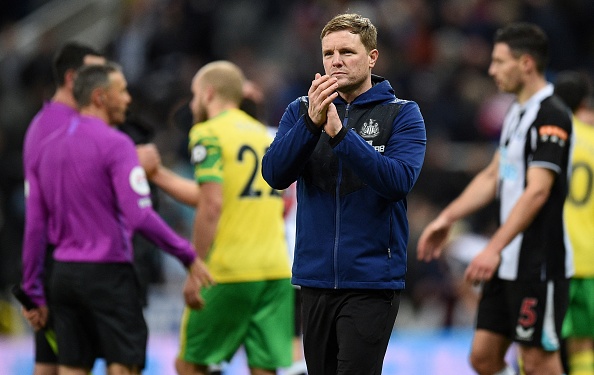 The January transfer window is into the final week and for Newcastle there is plenty of work still to do.

After a disastrous start to the season supporters will be hoping that the Magpies can use their newfound wealth to help them in the transfer market.

Kieran Trippier and Chris Wood have alright signed, while plenty of new names have already been linked with a move to St James’ Park this month.

There’s a lot of noise around the Magpies at the moment, so here are the top links and where things stand.

talkSPORT.com brings you all the latest transfer news and gossip from Tyneside.

Newcastle are confident of tying up a move for midfielder Guimaraes, talkSPORT understands, although Lyon insist the deal is not yet done.

The Brazilian international is the target of a £33.5million bid from the Magpies.

Arsenal have been one of a number of clubs said to be monitoring the 24-year-old, as well as the likes of Man United, PSG and Juventus but Eddie Howe’s side are edging closer to completing a move.

Newcastle are considering whether to make a second bid for the Brighton defender after having their initial offer rejected, talkSPORT understands.

The 29-year-old, a boyhood Toon fan, is in the last 18 months of his contract.

Brighton are not actively seeking to sell Burn this transfer window and an opening offer of £8million from the Magpies was swiftly rejected.

However, with their pursuit of Sevilla’s Diego Carlos dead in the water, Newcastle could yet return with a higher offer.

Newcastle are closing in on their third signing of the month in the shape of Mitchell Bakker.

The 21-year-old left back, who currently plays for Bayer Leverkusen, is closing in on a £14.5million move, according to the Telegraph.

Discussions over personal terms are now underway as Eddie Howe looks to get a deal over the line.

Newcastle are keen to press on with a deal to sign Jesse Lingard in the coming days, according to Fabrizio Romano.

The Manchester United midfielder is out of contract in the summer and after falling out of favour looks destined to leave Old Trafford.

It’s claimed that they’re interested in a deal that would bring him to Tyneside until at least the end of the season when he becomes a free agent.

Newcastle are also considering a move to sign Dele Alli from Tottenham, according to the Daily Mail.

The Tottenham star looks like his days at the club are numbered after being left out of the matchday squad for the clash with Chelsea at the weekend.

While a permanent move might not be on the cards, the midfielder has been linked with a loan switch to St James’ as he looks to get his career back on track.

Another player who Newcastle are interested in is Hugo Ekitike.

The 19-year-old Reims striker is regarded as one of the hottest prospects in French football and has been linked as a potential solution to the Magpies’ striking woes.

According to 90min.com, the Magpies have had a £29million offer rejected for the player but remain interested in a move.