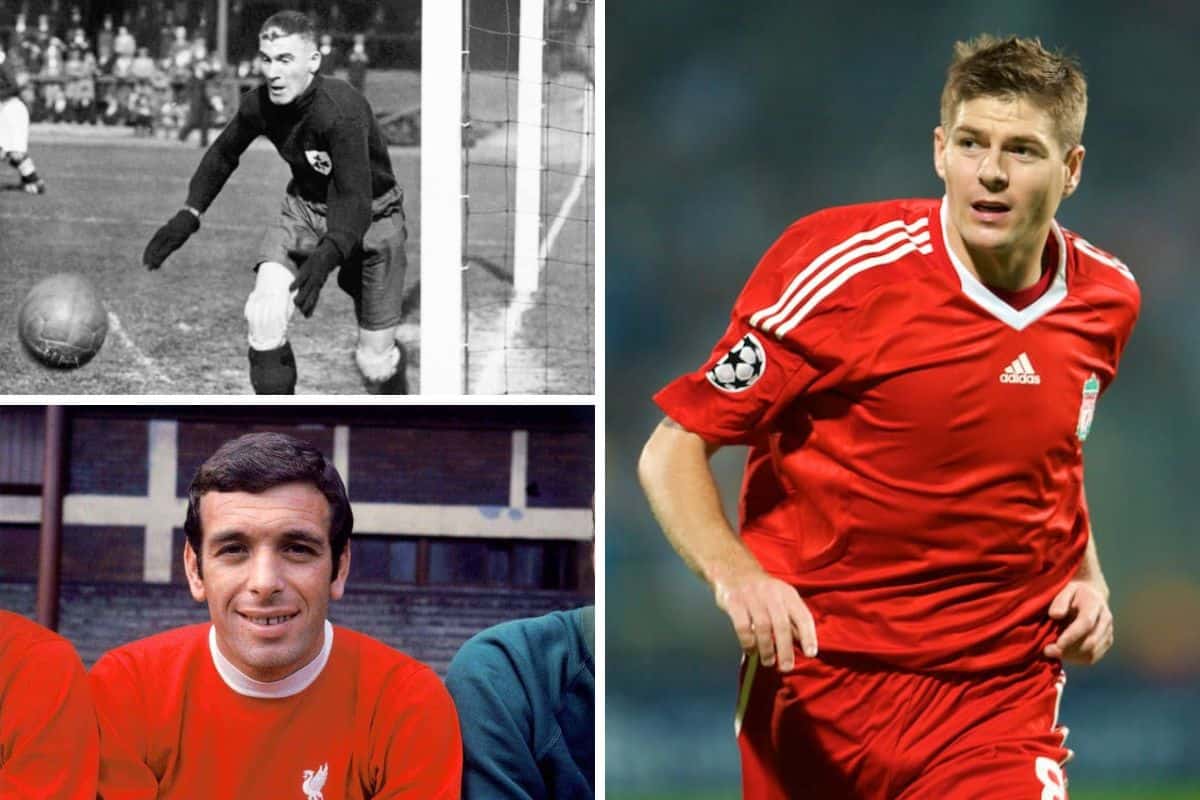 Some incredible footballers have stayed loyal to Liverpool for most, if not all, of their playing careers, but who are the Reds’ 10 longest-serving players?

Most would love the opportunity to stay at Anfield right up until the day they hang up their boots, but for various reasons, that rarely happens to be the case.

There are, however, a handful of lucky players who could call Liverpool their team for an extremely long time.

Here, we list the 10 players with the longest time period between their first and last appearances for the Reds.

Scotsman Liddell is one of only four players to breach the 200-goal mark in Liverpool’s history.

In his early years with the club, he studied as an accountant alongside his football commitments, with his parents keen to ensure he had something to fall back on if football didn’t work out.

They needn’t have worried about that, with Liddell going on to become one of the most prolific strikers in Reds history.

Former Reds’ captain Smith earned the nickname of the ‘Anfield Iron’ due to his uncompromising style as a defender for his hometown club.

Despite that reputation, he was only sent off once in his 638 appearances for Liverpool which came between May 1963 and April 1978 and saw him win four league titles, the European Cup, two FA Cups and two UEFA Cups.

A boyhood Evertonian, Carragher joined the Liverpool academy at the age of 10 and would go on to play for the club for his entire career.

His debut came in a 2-1 defeat to Middlesbrough in January 1997, the first of 737 appearances for the Reds, the second-highest in club history.

He won nine major trophies, the pick of the bunch being the Champions League in 2005, before bowing out on the final day of the 2012-13 season.

Having played for Everton as an amateur, Balmer was released by the Toffees at the age 19, and their loss was Liverpool’s gain.

Balmer’s superior skill and intelligence ensured he became one of Liverpool’s greatest forwards, and he’s still considered as the man responsible for the club’s fastest goal after just 10 seconds against Everton in 1938.

A distinguished and loyal servant who sits in 14th position on Liverpool’s all-time top goalscorer list, Balmer played for the club between 1935 and 1952.

Gerrard ranks third in the list of players to have made the most appearances in Liverpool history.

In an era when Liverpool largely struggled to compete at the highest level, Gerrard was the standout performer by some distance. Having come through the academy, he signed his first professional deal in 1997, making his debut the following year.

He would go on to become an all-time great, turning down lucrative offers from some of Europe’s top clubs in favour of staying at Anfield. His last appearance game at the end of the 2014-15 season, before he finished his career in America with LA Galaxy.

Born in Bolton in 1887, Longworth had a remarkable 18-year career as a Liverpool defender.

He played his first game for the Reds in 1910 and was an integral cog in the relentless machine that won back-to-back league titles in the early 1920s.

The advent of the First World War robbed Ephraim of his best years, but he still notched up 341 games for Liverpool.

A promising striker in his younger days, Taylor eventually ended up forging an incredible Liverpool career as a classy defender.

He scored a last-minute goal at Derby on his debut on 28 March 1936, and played for the Reds right through until 1954, making 345 appearances, and representing England three times.

Taylor lived to the age of 95, and was believed to be the oldest living England international footballer at the time of his death.

There is surely no catching the player to have made the most Liverpool appearances (857), the great Ian Callaghan. He won six league titles, two FA Cups and two European Cups.

Having played more centrally as a wing-half in his schoolboy days, at Anfield Callaghan was asked to play wide on the right, where he was able to use his power and pace to beat defenders and get to the byline and whip in crosses.

It was in this role that he made his mark, and with the arrival of Bill Shankly in 1959, he would sign a professional contract in 1960. He made his debut later that year and stayed with the club right through until 1978.

McKinlay made his Liverpool debut at 19 years of age on 20 April 1910, and played a key role in the team that won successive League Championship titles in 1922 and 1923.

His shooting prowess gave him a return of 34 goals for Liverpool, of which only four came from the penalty spot, not bad for a left-back!

Will anyone ever come close to playing for Liverpool’s senior team for over 21 years? In this day and age, it would appear extremely unlikely.

Scott is one of the greatest goalkeepers in the club’s history, making 468 appearances between 1913 and 1934, and had World War I not taken away four years of his career, he would undoubtedly have made a lot more.

The longest-serving player in Liverpool’s history, and by some distance, and an undisputed King of the Kop.