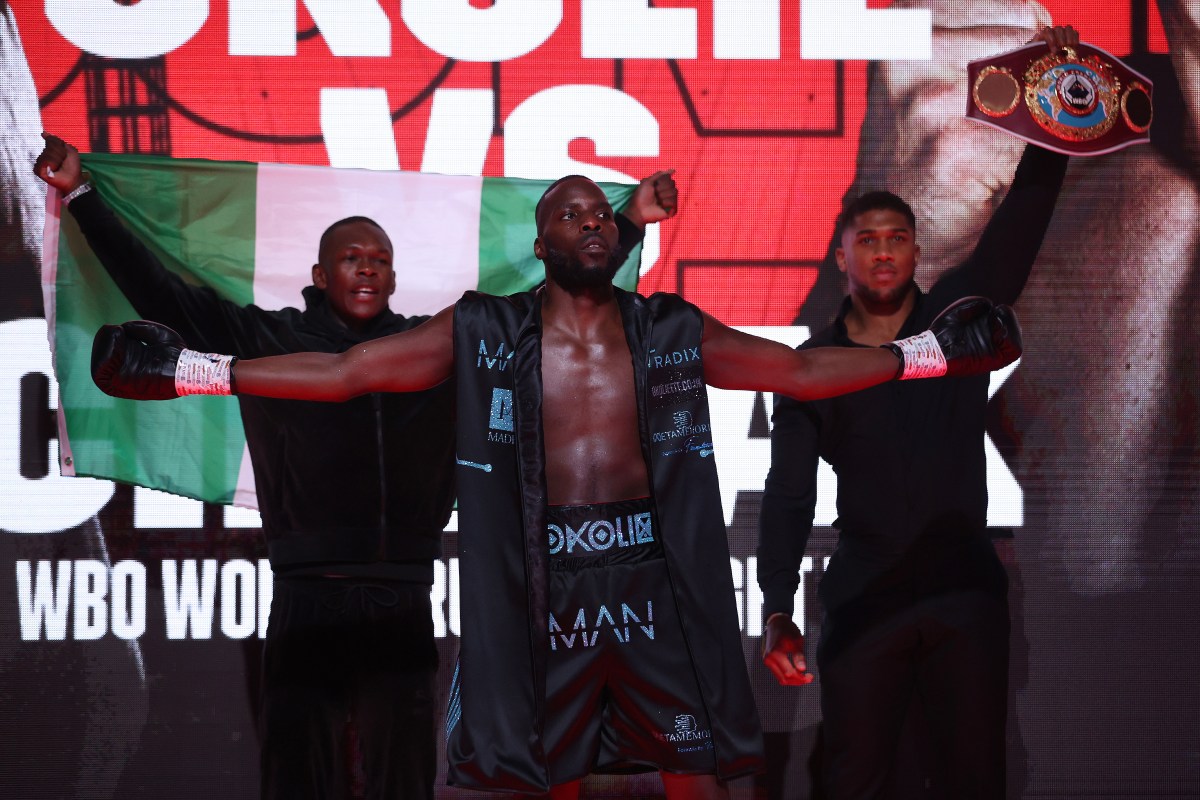 Lawrence Okolie successfully defended his WBO cruiserweight title against Michal Cieslak at the O2 Arena on Sunday, but he could not get he finish he craved.

UFC middleweight champion Israel Adesanya walked Okolie to the ring with the Nigerian flag held aloft while manager and mentor, Anthony Joshua, carried Okolie’s world title to the ring, too.

Okolie came flying out of the blocks and the two men locked up immediately in the centre of the ring as they held onto each other, seemingly trying to establish a physical dominance.

The Sauce caught Cieslak with his trademark right hand in close towards the end of the first round and it seemed like an early exit for the Pole was on the cards, but he managed to survive the round.

Okolie wanted the big stop and he wanted it early. The problem was he wanted it too much and he was getting too close to Cieslak which enabled the challenger to smother the champion’s work.

Shane McGuigan was begging Okolie to work from range and jab. Okolie had already displayed he had the necessary power to get rid of Cieslak, now he had to put together the right formula to get the opening he needed.

Okolie went back to his patented jab to the body, a searing shot he lands so well with his fantastic length. Cieslak came out more game in the third round and was prepared to trade, but once Okolie’s right hand came out to play again the power difference was clear.

Cieslak stuck with Okolie despite his body being savaged with shots every single round. The pair fought after the bell in round four and as they continued to scrap in round five, the Pole’s confidence grew to his detriment.

Okolie dropped Cieslak with a nasty overhand right to get his first count of the fight. Cieslak answered it and was then staggered by a jab and a straight down his throat. While his legs buckled, he did manage to stay in the fight.

Into the sixth, Okolie was really going looking for the finish and launch his one-two combos from range hoping Cieslak couldn’t smother him.

The first time Okolie really took a heavy shot came in the seventh round when Cieslak landed a sweet hook as the Briton stood in the pocket trying to assert his dominance. He took it fairly well, but Cieslak proved once more he didn’t plan on going anywhere.

Cieslak won the seventh and then came out with some renewed faith in the eighth. This was not the straightforward fight it started out as; Cieslak learned to read where Okolie’s right hand was coming from and event though Okolie had landed double the punches through nine rounds, he wanted the power shot – very obviously – and couldn’t find it.

The fight became very gritty with a lot of clinching and holding going on. Okolie did nail a big right hand that penetrated the Pole’s guard in the tenth and he had firmly regained control of the battle.

Despite being well ahead, Okolie took the unnecessary risk of trying to stop Cieslak in the final round and while he did manage to land a few clean shots, the stubborn Pole refused to go away.

There was no slipping jabs or counter-punching here; Okolie just measured the distance with his left hand and swung his right hand hoping to put Cieslak to sleep. But, he did not.

Still, Okolie succeeded in the second defence of his WBO Cruiserweight title and is now in the position he wanted to remain: Ready for cruiserweight unification title fights.