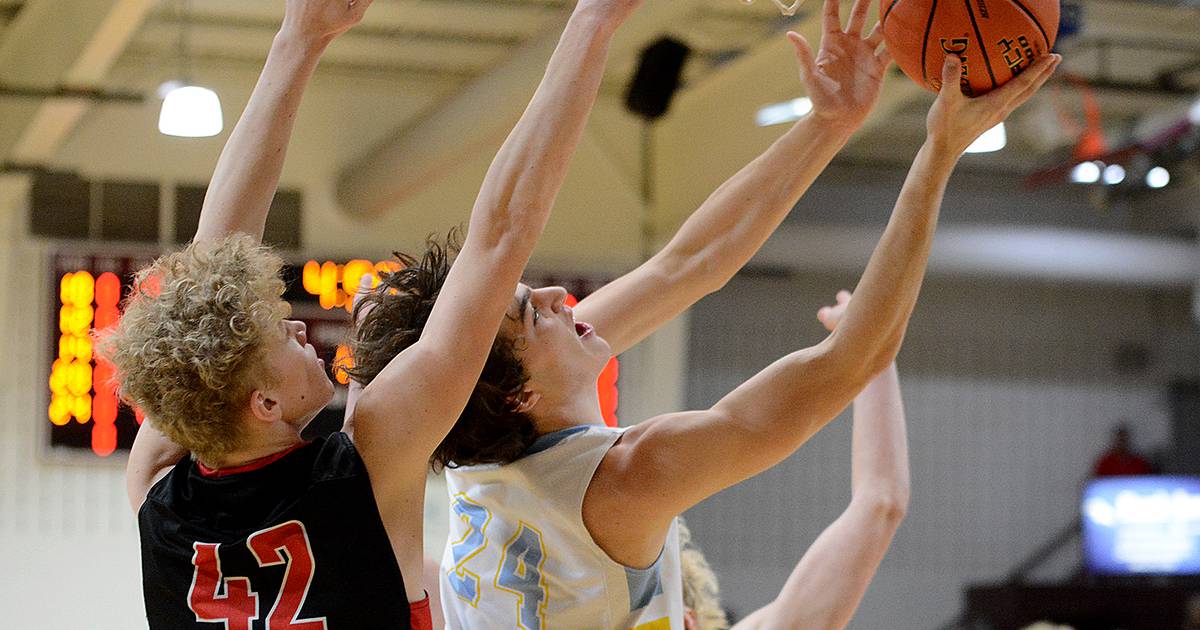 OSKALOOSA — Through three quarters, the pace of the Class 1A Substate 6 championship game between Lynnville-Sully and North Mahaska was just what the Hawks wanted.

The boys basketball game was low scoring and physical. Unfortunately for L-S, the Hawks just couldn’t score enough points and the Warhawks used a big fourth quarter to pull away during a 46-31 victory.

North Mahaska led by three after three quarters but outscored Lynnville-Sully 16-4 in the fourth to win going away.

“I feel like the pace of the game fit our team. It was a defensive battle,” L-S head boys basketball coach Nick Harthoorn said. “We just struggled to score and make shots. Give North Mahaska credit. Their length made it tough on us to finish around the basket.”

The two South Iowa Cedar League rivals split their two regular season meetings. The Warhawks scored 77 points in their win but reached just 45 in the loss.

Saturday’s game was similar to the latest meeting, but the Hawks could only muster a season-low 31 points and ended their season one game shy of the state tournament.

The Warhawks will be the No. 7 seed at the state tournament and face second-seeded North Linn at 2 p.m. on March 7 at Wells Fargo Arena in Des Moines.

“I told them to keep their heads held high because it’s been a fun ride,” Harthoorn said. “We were a three seed on our side and took down the No. 2 and then the No. 1 seed.

“We put ourselves in position to play tonight and there were only 16 teams left playing in Class 1A. There’s certainly a lot to be proud of.”

The largest lead of the game through three quarters was the six-point advantage the Hawks held in the second. There were four ties in the contest, too.

Lynnville-Sully (18-7) got out fast as Conner Maston and Corder Noun Harder hit bookend 3-pointers and Klayton Van Dyke scored on a putback to give the Hawks an 8-3 lead.

The third quarter was back and forth. With North Mahaska up 25-24, Mason Rodibaugh drained a trey to put the Hawks back in front.

The Warhawks scored the final five points of the third and used a 10-0 run in all to grab their largest lead of the game. Another 6-0 spurt after an Annee bucket inside made it 41-29.

Noun Harder’s 3 in the first were his only points, but he grabbed four rebounds and delivered five assists. Sieck and Hardenbrook each scored three points off the bench.

The Hawks shot 20 percent from the floor, 7-of-30 from 3-point range and 2-of-4 from the line. They were called for 18 fouls, while North Mahaska was whistled for only seven.

“I thoroughly enjoyed having the opportunity to coach this group of young men,” Harthoorn said. “They competed hard and finished the season strong.”

The 46 points by the Warhawks were the second fewest they scored in a game this season. They put in just 45 against L-S in the team’s loss the Hawks earlier this season.

Ethan Huffman, who came into the game averaging 8.5 points per contest, had a game-high 14 points and grabbed five boards.

Smith came into the game averaging 20.4 points per contest, but Maston held him to nine. Five of those came early in the fourth during the Warhawks’ deciding 10-0 run.

“Conner defensively all year has been tough as nails,” Harthoorn said. “Corder Noun Harder also does that for us. We rely on both guys to do so much at the offensive end, but at the same time they are usually guarding the other team’s two best players.”

Notes: Both teams came into the game on three-game win streaks. North Mahaska has now won six of its last seven. … Each team was held to least 23 points below its season scoring average.