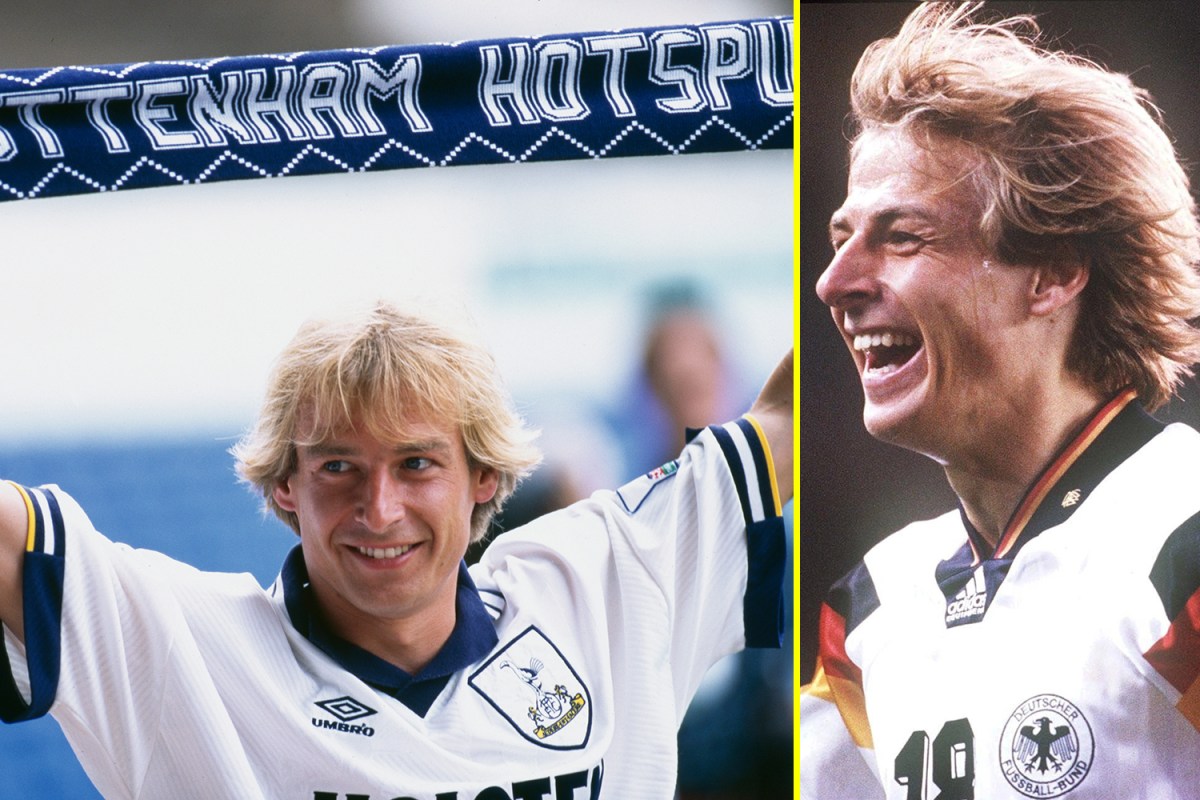 There’s not much Jurgen Klinsmann didn’t achieve during an illustrious career across Europe and with the Germany national team.

The striker was deadly in front of goal and had a pretty good sense of humour too, so it’s easy to see why he was popular with teammates and fans alike.

So what better person to kick-off a brand new series of talkSPORT’s My Sporting Life than Klinsmann – who scored more than 300 goals for club and country.

His playing career took him from Stuttgart, to Inter Milan, Monaco, Tottenham, Bayern Munich and Sampdoria.

But he first received international renown for winning the World Cup in 1990 with Germany, scoring three times along the way.

He had just moved from Stuttgart to Inter Milan, but really announced himself on the world stage with a fine run at Italia 90.

Klinsmann admitted that winning it had greater significance for his country than just a football tournament.

He told Paul Coyte for the first edition of talkSPORT’s newest series of My Sporting Life: “The World Cup in 1954 that the German team won, that was the first time the Germans had a kind of feeling of ‘we can stand tall again’ and ‘we can show our faces again’ after the devastation of World War II.

“Then came 1974 when there was a worldwide crisis, the oil crisis then the ‘72 Olympics with the incidents there, the horrible ones and it just came together in the ‘74 World Cup that the Germans had an incredible team of quality. Franz Beckenbauer leading that team, Gerd Muller scoring all the goals and so forth.

“Our team in 1990 basically became the face of the reunification [of Germany].”

Klinsmann was prolific in Germany for Stuttgart, scoring 94 goals in 186 games, but his career was marked by being constantly on the move.

After time in the Bundesliga he tested his skills in Serie A with Inter Milan, but then Monaco came calling in 1992.

The Ligue 1 side were managed by a certain Arsene Wenger at the time and Klinsmann was relishing the chance to play with the great George Weah, or so he thought.

“I went to the president, the owner of Inter Milan, and asked him politely if it was ok I moved on and I promised him I wasn’t going to go to another Italian team,” Klinsmann said. “He said it was no problem and that he’d check it out. Then suddenly Monaco knocked at the door and Arsene Wenger was the manager in those days.

“So we took the helicopter from Milan to Monaco and went there, we had negotiations and it was all very easy. I had the offer to play up front with George Weah, who was one of the top strikers, and Arsene [Wenger] said ‘yeah, I want you two playing up front’ and I thought wow this is like winning the lottery playing with George Weah up front.

“So I signed the contract and I go the next day to Monaco and George Weah gets sold to Paris Saint-Germain.

“But the deal was signed and I spent two years with Arsene Wenger in Monaco.”

He may not have lined up alongside Weah, but he still scored 36 goals in two seasons.

Two years at Monaco was more than enough for Klinsmann and he was on the move again, this time to the Premier League.

Alan Sugar was the Tottenham owner at the time and the striker recalled the brilliant story of how he signed.

“After the World Cup in 94 I thought ok, let’s see what comes up,” Klinsmann said. “I’d scored five goals in the World Cup and if I’d had played two more years I could’ve been top scorer but unfortunately we left in the quarter finals.

“He explained himself right away and said ‘I’m the chairman of Spurs, nice to meet you, I’m actually here in Monte Carlo on my yacht, is there any chance we can meet up for a coffee?’

“So we had a cappuccino and over two hours we discussed things and the deal was done. I called Arsene, I came over to the club, he came with me, they shook hands, it was very easy and suddenly I was a Spurs player.”

Tottenham fans, and plenty of others, will remember his infamous diving celebration he pulled out after scoring on his Premier League debut.

He was accused of being a diver by the press and Klinsmann revealed how it all came about.

He explained: “Before my first game in the Premier League against Sheffield Wednesday, Teddy Sheringham said ‘mate, if you really score one, then we’re all going to do a dive’. It was all Teddy’s fault!

“There were thousands of Sheffield Wednesday fans outside the stadium, we’re driving through in the bus and they were holding up signs with ‘5.8’, ‘5.9’, ‘5.7’, basically saying here’s the diver we’ll give him a welcome here.

“The guys on the bus were just laughing, that’s when the guys were like ‘right when you score a goal, we’re all going to do a dive’.”

After just one season at Tottenham, Klinsmann left again and headed back to his homeland with Bayern Munich, winning the UEFA Cup and Bundesliga title across two seasons.

He went to Sampdoria before a short loan at Tottenham ended his career in 1998, not before helping Germany win Euro 96 and break English hearts in the process.

Klinsmann’s career then went down the coaching route, guiding Germany to a World Cup semi-final in 2006, before a short stint at Bayern Munich.

He was United States manager for five years and most recently in charge of Hertha Berlin.

And what about a potential reunion with Spurs as a manager one day?

It’s a prospect Klinsmann has talked up in the past, but it’s not something he believes will happen now.

He said: “The question is would you fit the people who are there right now? So when I came to Spurs as a player, as funny as Alan Sugar was, we matched and we had fun because he’s an entertainer and conversation.

“Now obviously 30 years later you have different people in charge, they make different decisions and they go their own route. What remains is the DNA of the club and the fans and the identity with the players.

talkSPORT’s new series of My Sporting Life starts on Sunday at 8pm with Jurgen Klinsmann reflecting on his incredible career with Paul Coyte.