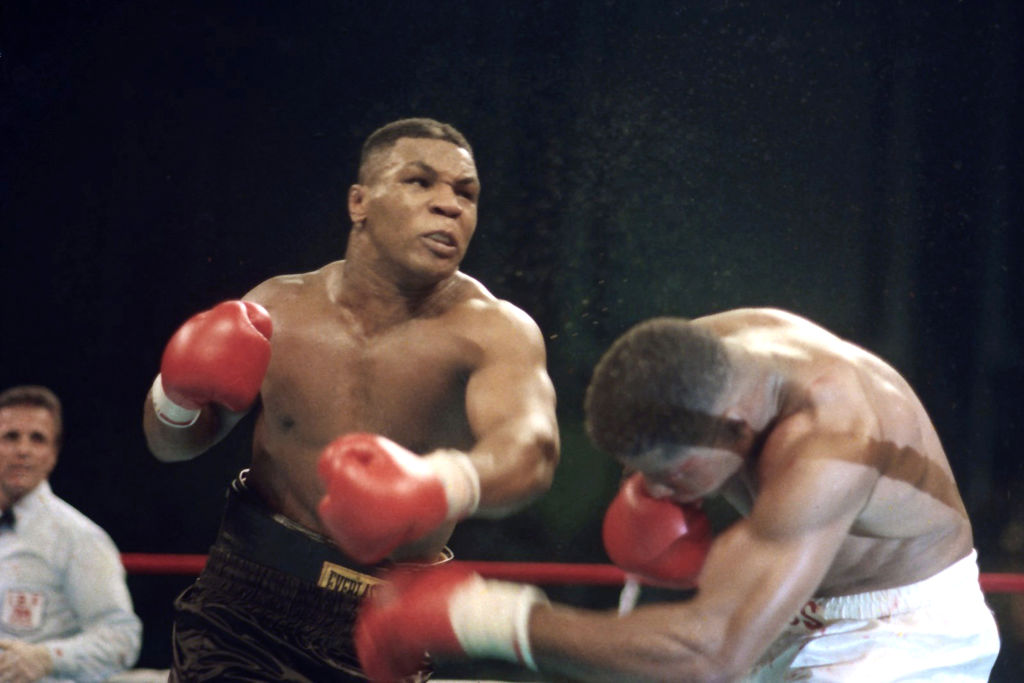 Mike Tyson in his prime gave off the menacing aura that he hated each opponent before the bell rang – but the heavyweight has said there was only one rival he truly despised.

“I never really hated anybody. I think I hate Tyrell Biggs,” snarled Tyson before their 1987 world title fight. “I want to give him a lesson, I want to hurt him real bad.”

The 21-year-old Tyson aimed to hurt every opponent he fought, but each of them were just obstacles to his goal of becoming the undisputed ruler of the division. Mentor Cus D’Amato had taught Tyson to be single-minded and to use intimidation as a weapon, but it was never personal. Except with Biggs.

Tyson, one of the most devastating finishers when he had an opponent hurt, admits that he deliberately carried Biggs, extending a tortuous beating to the end of the seventh round before finally sending his bloodied and battered foe to the canvas. “In the third round I knew I had him,” said Tyson post-fight. “He was crying. When I was hitting him to the body, he was making noises, like a woman screaming.

“I could have knocked him out any time after the third. But I wanted to make him pay for what he said.”

Biggs acted mystified that Tyson felt such venomous hostility towards him, claiming: “I didn’t say anything that should have angered him… All I said was that I was confident I could beat him.” Yet deep down, Biggs probably knew what this was about.

In common with many personal grudges in boxing, it all went back to the pair’s amateur days. Biggs was the golden boy when they were both in the US team; a slick, rangy, 6ft 5in boxer who would go on to win a gold medal at the LA Olympics in 1984.

Such was Biggs’ supremacy in the super-heavyweight division that Tyson had to compete in the amateur heavyweight ranks (below 91kg). A teenage Tyson lost a US box-off against Henry Tillman and was so enraged that his Olympic dream had been shattered that he marched out of the venue where the trials took place and began smashing a tree trunk with his fists.

However it was not Tillman (who Tyson would go on to KO inside a round as a pro) but Biggs whom ‘Iron Mike’ felt literally belittled by.

Five years Tyson’s senior, Biggs mocked the Brooklyn puncher’s lack of height and crude skills. Despite not qualifying for the Olympics, Tyson travelled to LA with the US team to gain experience. When a well-meaning fan, seeing the boxing squad at the airport, wished Tyson luck in his fight, Biggs responded: “What? You mean on his flight, not his fight. He’s not fighting at the Olympics.”

Three years later with the pair set to meet as professionals, a seething Tyson had not forgotten. “Shit like that stayed with me then,” he says in his autobiography, Undisputed Truth. “I trained so hard. I was motivated to kick his ass.

“I don’t even like talking about this fight. It was seven rounds of punishment. I elbowed him, low-blowed him, punched him after the round was over.”

By 1987, the tables had turned in terms of their standing in the boxing world. Both were undefeated but after a whirlwind two-and-a-half years as pro, Tyson had collected all of the major heavyweight belts (though linear champion Michael Spinks was still yet to be conquered). Biggs was 15-0 but his stick-and-move style had failed to enthuse fans and, in common with many American heavyweights of the era, his career had been interrupted by trips to rehab for drug problems.

Despite this, Biggs fell easily into the pre-fight role of Tyson’s superior, just as he had been during their amateur days. The 26-year-old referred to his rival as “our little friend”, adding: “I’m not here to lay down. I’m not afraid of Mike Tyson, because he’s a man like myself. On top of that, he’s 5ft 8in and 220 pounds, and I’m 6ft 5in and 225 pounds.

Tyson’s officially listed height was just under 6ft but the tongue-in-cheek Biggs wasn’t the first to question it, with many assessing that the muscular, sawn-off champion was closer to 5ft 10in. Biggs seemed incredulous that a man with his array of boxing skills was the underdog. “I don’t know this Tyson the way you guys talk about him,” he told the media. “I know Tyson from way back when. He’s never fought anyone like me, someone with a strong jab who can box and is not going in there just to survive.”

Despite Tyson’s formidable KO power, two of his last three opponents had done just that, spoiling their way to 12-round decision defeats. The press were beginning to question Tyson’s ability (“I got flaws? Then find somebody to beat me,” Tyson fired back) and even the legitimacy of his power. All of this added to the powder keg of anger that was ‘Kid Dynamite’ as Tyson made his way to the ring in Atlantic City to face Biggs, shirtless with his title belts and drenched in sweat.

The first round went just as Biggs planned as he glided around the ring and landed with 19 jabs to Tyson’s face. Unfortunately for Biggs, round one was the only thing he would win all night. Tyson, cutting off the ring and applying pressure, began catching his opponent clean in the second round and by the third, Biggs had a cut above his eye and was bleeding from the mouth.

However, rather than go for the KO as he had in demolishing Trevor Berbick to win the heavyweight title in 1986, Tyson prolonged the beating, softening up Biggs with crunching body shots. To his credit, Biggs showed tremendous heart in taking the punishment. He even got up from the long-awaited first knockdown via an explosive left hook in the seventh – but Tyson’s follow-up assault left him slumped in his own corner and the referee waved it off.

After such a dominant display against a previously unbeaten Olympic standout, even Tyson’s critics had to admit he was the real thing. Within a year, he had laid waste to Larry Holmes, Tony Tubbs and Spinks (in 91 seconds) to erase all doubt about the planet’s no.1 heavyweight. Biggs, meanwhile, would go 15-9 in the remainder of his career before retiring in 1998, the beating from Tyson being his only world title shot.

Tyson had run-ins with other opponents. He feuded with Mitch ‘Blood’ Green (though their bad blood bizarrely began after they had fought in the ring, when they clashed in a street brawl) and bit Evander Holyfield’s ear and Lennox Lewis’s thigh. But the feeling was that Tyson was at war with himself as much as he was harbouring real resentment to an opponent. With one rival, it was truly personal.

“He talked so much, he didn’t show any class or respect,” Tyson said after the beatdown of Biggs. “I wanted to make him pay with his health. Needless to say he did.”