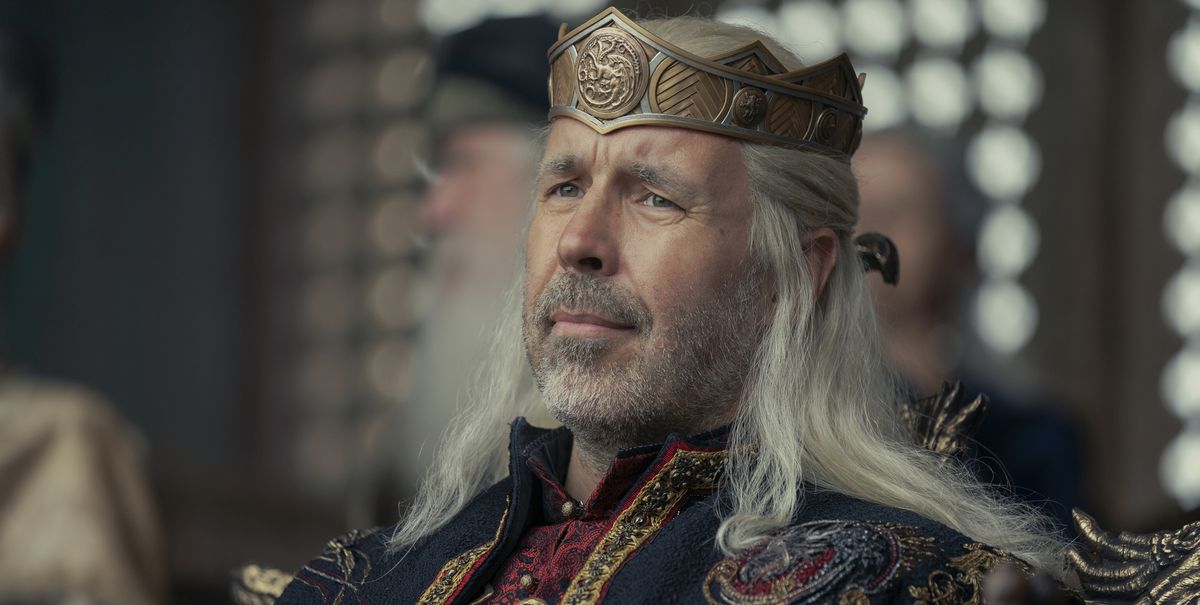 To hear even snippets of Game of Thrones’ beloved theme played once again is an event both stirring and terrifying. There is a chance, however slim, that this story will re-capture the power felt, on a borderline religious level, by millions of fans from 2011 to 2019 (and much longer, through George R. R. Martin’s ongoing book series). But there is the equal likelihood House of the Dragon, HBO’s new Game of Thrones prequel series, will wither in the shadow of its predecessor, further stratifying the many fans its flagship series lost in its disastrous final seasons. HBO knows this better than anyone: Another blow would be tantamount to blasphemy, smothering what remains of the legendary in the Game of Thrones Cinematic Universe.

House of the Dragon is the network’s long-awaited shot at retaining not only relevancy, but adoration. Initial critical responses are mostly positive, though mixed, but it’s fair to argue that the prequel’s full impact won’t be felt until its full first season unfolds. To that end, we’ll be recapping the series, not only to make sense of the overwhelming Westerosian world, but also to glean if HotD truly has the gumption to make lightning strike twice.

And so we begin. House of the Dragon’s first episode begins with a heavy dose of exposition, delivered via solemn, British-accented voiceover. (At this point, the series is begging for comparisons to Lord of the Rings, which did the entrancing voiceover prologue much better.) Still, the message is relayed: As the first century of the Targaryen dynasty sped into the second, the “old king” Jaehaerys I was forced to choose a successor, given that his only biological sons had both died. He selects not his eldest descendant, Princess Rhaenys Targaryen (Eve Best), but instead opts for Prince Viserys Targaryen (Paddy Considine), his eldest male descendant. “Rhaenys, a woman, would not inherit the Iron Thone,” reiterates Rhaenyra (Emma D’Arcy), Viserys’ daughter, in the narration—in case there was ever any doubt this show is about sexism.

We then get a time skip to Year 9 of Viserys’s reign, 172 years before the birth of Rhaenyra’s ancestor, the future Queen Daenerys Targaryen. Rhaenyra (Milly Alcock), our adult narrator now rewound to her childhood years, is on dragonback. She alights down amongst the familiar red-roofed abodes of King’s Landing, where she meets her best friend, Alicent Hightower (Emily Carey), and her mother, Queen Aemma (Sian Brooke), who’s nine months pregnant with what the king is certain will be a son.

Sweating and sprawled across a litter, Aemma insists to the young Rhaenyra, “This discomfort is how we serve the realm.”

“I’d rather serve as a knight and ride to battle and glory,” Rhaenyra responds, aligning herself with the ranks of countless other tomboy protagonists so deserving of their TikTok spoofs.

Meanwhile, the king has concerned himself with more pressing issues of diplomacy. Lord Corlys Velaryon (Steve Toussaint) is concerned about the “growing alliance among the free cities,” known as the Triarchy, whose recent landing at Bloodstone is forcing out the pirates in the area. Viserys isn’t sure why that’s bad news, but Corlys is concerned about Craghas Drahar—the Crabfeeder—who’s taken on the title of Prince Admiral. Such a zealous swipe at royal standing could prove a threat to the Targaryen monarchy. But Rhaenyra, the king’s cupbearer, interrupts before Corlys can lay out his point further.

The council skips ahead to other worthy topics of discussion, perhaps most pressing of which is Prince Daemon’s new position as commander of the City Watch. Daemon (Matt Smith) is Viserys’ brother—and therefore a successor to the Iron Throne—but is unscrupulous at best, bloodthirsty at worst. He’s pouring seemingly endless amounts of coin into reshaping the City Watch, and is unafraid to demonstrate the Watch’s power with gleeful displays of violence rivaling the more controversial moments of his descendant, Daenerys.

We get a few short hints at character insight: Under a heart tree in King’s Landing, Alicent lets Rhaenyra rest her head in her lap while she quizzes the latter in Westerosian history. (Alcock is fabulous at threading parallels between herself and Daenerys, while making Rhaenyra both more autonomous and more conflicted.) In the Red Keep, Viserys has an objectively disgusting wound on his back inspected. (There’s a lovely shot of a pus extraction, in case you weren’t paying close enough attention.) “Bad humors of the mind can aversely affect the body,” a maester tells Ser Otto Hightower (Rhys Ifans), Hand of the King, who insists on keeping the king’s condition—whatever it is—quiet.

It’s as if HBO’s nervous anticipation over the series launch is replicated in the pilot’s own mood. Everyone is anxious, including Viserys, who visits his wife as she bathes. She reveals she’s lost five other children over the course of a decade: one died in the cradle, two were stillbirths, and two were miscarriages. “I’ve mourned all the dead children I can,” she says. Viserys is empathetic, but not enough to be by his wife’s bedside when her labors begin.

Meanwhile, Daemon intends to teach the city to “fear the color gold.” He unleashes his City Watch upon King’s Landing, and they maim, torture, and kill those they deem criminals with so little discretion that a two-horse cart is necessary to tote the body parts in need of disposing. When the council gathers to discuss his “impunity”—as well as his ongoing absence from his “lady wife” in the Vale, Rhea Royce, a.k.a. the Bronze Bitch—Ser Otto chides Daemon. The latter takes swipes at Otto’s late wife, foreshadowing the brewing rivalry between them.

After a pep talk from his lover, Mysaria (Sonoya Mizuno), that evening, Daemon arrives the next day at Viserys’ tourney, where the king announces to his people that Queen Aemma is in the process of giving birth. Dragon, here, employs what Game of Thrones did first: weave important diplomatic dialogue into scenes of increasingly startling violence. A Baratheon competitor insults Viserys’ claim to the throne; Rhaenyra and Alicent exchange gossip about Stokeworths and Tarlys and children out of wedlock; Princess Rhaenys remarks on the 70 years that have passed since any so-called knights saw real war. But the real moment to watch for is when Rhaenyra asks about Criston Cole (Fabien Frankel), an essential figure in the Dance of the Dragons lore for his role in [redacted] and [redacted]. I’ll save the spoilers, but the point remains: You’ll want to keep an eye on that handsome knight.

In his first joust, Daemon, ever contemptuous, challenges Ser Otto’s son, whom he unhorses with a cheap shot to the horse’s legs. But Otto doesn’t have much time to linger on this sting; he’s received news that Aemma’s labor isn’t going well, and so Viserys finally rushes to his wife.

Childbirth has always been a violent gamble for its bearers, especially before the dawn of modern medicine, but Dragon’s choice to depict a gruesome C-section, sans anesthesia, with such an unflinching eye is a complex one. The gore is not inaccurate, but neither is it sparing. As Aemma screams, the camera whizzes back and forth between her writhing body and the clashing spears of the tourney. The parallel is so obvious, so on-the-nose, it’s equally nauseating and exasperating.

Although Viserys is presented as a Ned Stark type—good-hearted but easily subverted—I find little sympathy for him as Aemma registers the sacrifice her husband’s willing to make. Her shrieks for mercy are ignored as she’s dragged to the center of the bed and sliced open, the walls of her abdomen pulled apart with gloved fists.

Dragon has promised less “gratuitous” violence than its predecessor, but this is still a Thrones prequel. Gratuitousness is embedded in its DNA. The franchise’s accuracy to medieval violence might, arguably, legitimize its depiction. But I’m not so convinced the world isn’t already all-too aware of the bloody horrors women have endured in bed or on the surgeon’s table, all in the name of sex and reproduction, whether forced or desired. There are few issues as obvious, as divisive, as modern. What is Dragon trying to say here that’s interesting, insightful, or even remotely novel? I hope, whatever it is, it’s better distilled in future episodes.

On the tourney field, Criston and Daemon duel, with Daemon forced to yield after a premature celebration of his prowess. Today is a losing day for the Targaryens, as Aemma quickly succumbs to her blood loss and the babe dies hours later. Viserys, mourning, is seemingly unable to command the dragons to burn his wife’s body, and so it is Rhaenyra who must give the command made iconic in Thrones: “Dracarys.” Dragon fire.

The council immediately dives into deliberation over succession. (This franchise is, after all, called Game of Thrones.) At this point, Daemon is first in line, but the council fears his rule would “destabilize the realm.” Rhaenyra is the biological heir, but one frustratingly lacking in male genitalia. In the midst of this debate, Otto calls for Alicent, in hopes she might cheer a mournful Viserys. This, I find a curious request so soon after Aemma’s death. Otto seems a genuine friend to Viserys, but it’s impossible to read his summoning of Alicent as anything other than a ploy for a Hightower to become Queen Consort. Alicent’s face says as much. “Go to him. Offer him comfort,” Otto instructs. “In his chambers?” Alicent asks, her cheeks twitching. “You might wear one of your mother’s dresses,” he adds. In Viserys’s chambers, she tells the king what she wished someone had said when her own mother passed: “I’m sorry.”

Elsewhere, Daemon partakes in an orgy—what, you expected to get through a Thrones episode without an orgy?—during which he toasts to Viserys’s son, “the Heir For a Day.” Livid, Viserys summons his brother to the Iron Throne, whereupon Viserys sits with a sword at his side. He castigates Daemon for touting his own rise during his brother’s time of grief, but Daemon is eager to spar. “Ten years you’ve been king, and yet not once have you asked me to be your Hand,” he spits. The thought of it is almost laughable to Viserys, but Daemon insists he sees Otto’s ulterior motives clearly—as, now, has the audience. “You’re weak, Viserys, and that council of leeches knows it,” Daemon tells the king. “They all prey on you for their own ends.”

Viserys, now seemingly out of spite, tells Daemon there will be a new heir to the throne, and Daemon is to return to Lady Rhea in Runestone. Daemon—already plotting his next move—departs, and as Viserys leans back on his throne, he slices his finger on one of its blades. (Despite the dour mood of the scene, I had to laugh at how poorly House of the Dragon has deployed the art of subtlety thus far.)

And so begins the Dance of the Dragons. Viserys reveals to his daughter that she is the new heir, but that she should consider such power no mere privilege. The Targaryen empire is strong, but only insofar as its dragons allow—and dragons are notoriously difficult to control. As the houses pledge fealty to the named heir, Rhaenyra looks on, thinking of the long winter her father warned—what Game of Thrones fans will recognize as the second Long Night, fought over and against in the flagship series. A Targaryen must sit upon the Iron Throne when that winter comes, Viserys insists, fulfilling the legend known as A Song of Ice & Fire (also the name of Martin’s main book series).

As a similarly famous HBO show once taught us, it’s all connected. Dragon wants us to feel Thrones in every breath and backdrop, but also to distinguish itself as a heavy-hitter in its own right. To accomplish such balance would be a miraculous feat, one achieved by few spin-offs before it. But if Better Call Saul has taught us anything, it’s that franchises can birth powerful subsidiaries—if their overlords know when to wield discretion.

Lauren Puckett-Pope is an associate editor at ELLE, where she covers news and culture.