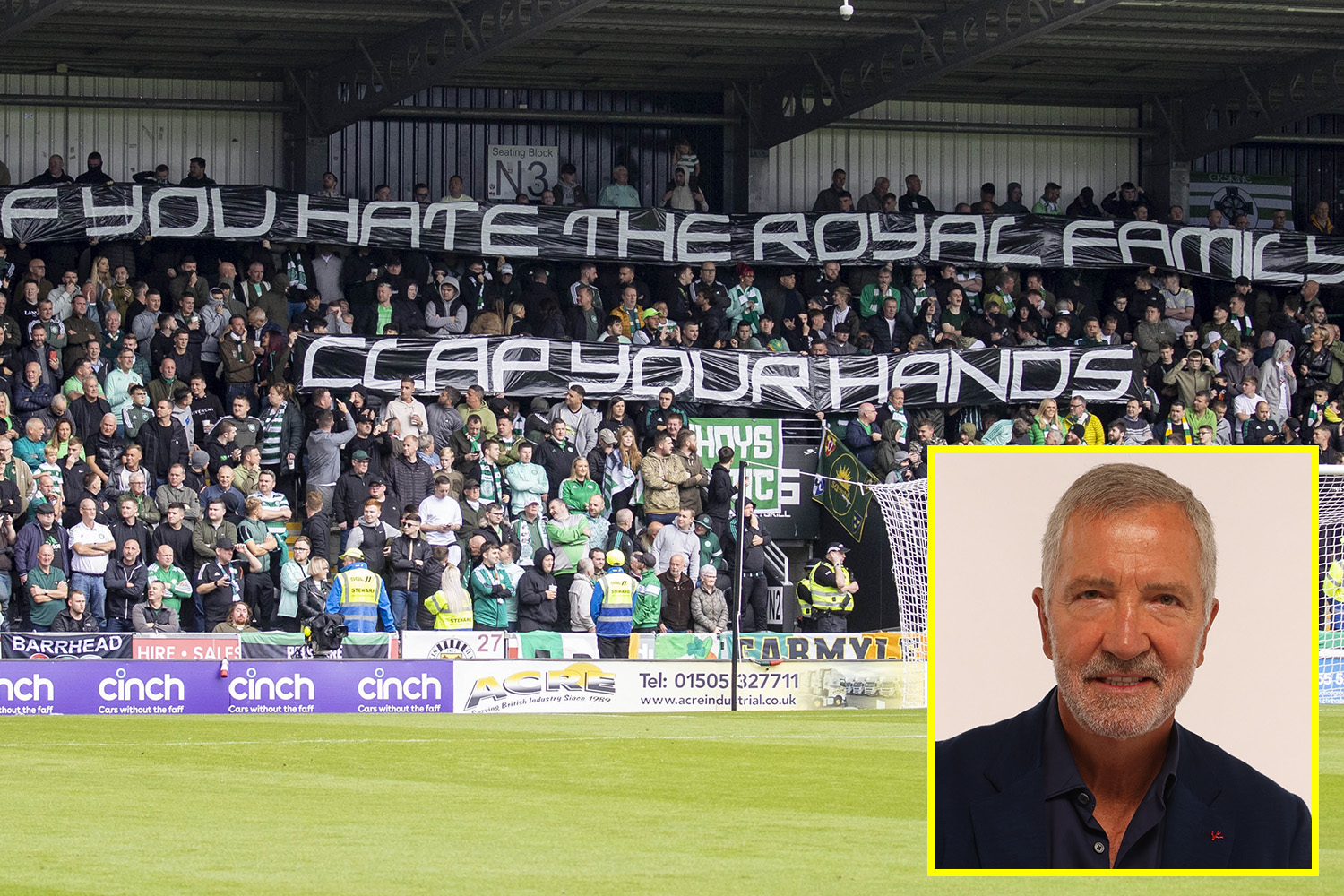 Rangers icon Graeme Souness has called Celtic ‘the unacceptable face of Scottish football’ after the club’s response to the death of Queen Elizabeth II.

A section of Hoops supporters displayed anti-Royal banners and chanted against the monarchy during a Champions League clash against Shakhtar Donetsk and again at St Mirren in the Scottish Premiership.

Travelling supporters in Warsaw last Wednesday unfurled messages which read ‘f*** the Crown’ and ‘sorry for your loss Michael Fagan’.

On Sunday, some Celtic fans sang ‘if you hate the Royal Family, clap your hands’ during a minute’s applause to mark the passing of Her Late Majesty, and displayed a banner to the same effect.

The Scottish champions’ top brass have since been silent on the matter and the club did not respond when asked for comment.

UEFA has launched an investigation into the banners displayed during the Champions League draw with Shakhtar, while the Scottish FA is yet to announce their response to the scenes at St Mirren.

Souness, a fierce royalist who served as player and manager at Rangers, believes Old Firm rivals Celtic are ‘shooting themselves in the foot’ with their handling of the situation.

Acknowledging it was a minority of the support, he told talkSPORT: “Whatever I say on this, people will think, ‘You would expect that because he was employed by Glasgow Rangers and he is a Rangers supporter’.

“You try and tell yourself to stand back and look at it with a bit of rationale. The eyes of the world were on this country in the last ten days.

“Celtic now have a major problem because if you’re a sponsor, or major company, looking to sponsor a football team in Great Britain – would you consider Celtic anymore? Not at all.

“The decision-makers at Celtic, being silent on this matter, are compounding the problem.

“It is amazing to me, and it is a minority, that they seem to be damaging the brand of Celtic beyond belief.

“They are synonymous with being the first team to win the European Cup [in 1967], a great success and institution in Scotland.

“If you’re a Rangers supporter, it’s happy days. Keep your silence. Please don’t say anything. They’re shooting themselves in the foot.

“They should’ve been out days ago condemning this.”

He added: “They are now the unacceptable face of football in Scotland.

“I’ve got to believe it’s a minority, I have pals who are Celtic supporters condemning it, why aren’t the club condemning it?”

He argued that while the reasons for anti-Royal sentiments at Celtic are well-known, freedom of speech is no excuse for abuse and disrespect.

“You cannot legislate for the hearts and minds of some of your football fans. But you can exhibit a better code of conduct than Celtic have done.

“Come out and say, ‘We think this is poor. We can’t dictate to our fans but we do not support these views and we would prefer they didn’t do these things’.

“I am perplexed Celtic wouldn’t want to do that.

“We know what this is steeped in: historic feelings towards the monarchy going back to the decentants of that part of the world, their Irish origin, their Catholisism and a variety of things.

Jordan added: “People are allowed dissenting voices. They are allowed a different opinion.

“The tragedy is that people use freedom of speech as an excuse for being disrespectful and abusive.

“Having freedom of speech doesn’t entitle you to run into a full building and shout, ‘Fire!’

“Being abusive about a monarch is not the same thing as having free speech.

“I do think Celtic have missed a trick. Do I think commercially, in the long game, they will lose endorsements and sponsorships? No, I don’t think they will.

“Like everything in life, there are moments in time.”