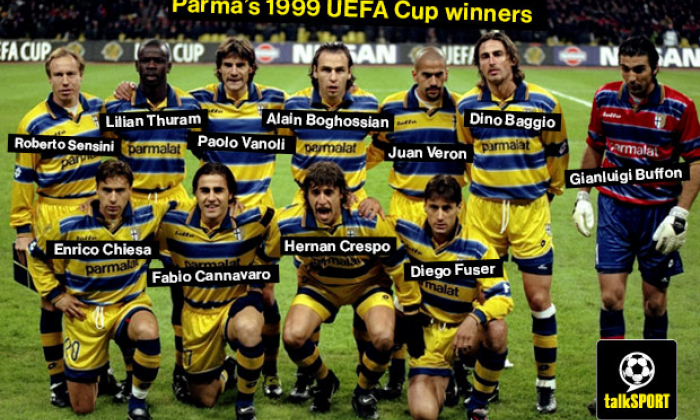 The goalkeeper – back at Parma where he began his glorious football career – has penned a new deal that will keep him at the Serie B club until 2024 when he will be 46.

Buffon came to prominence in the north of Italy in the mid to late 1990s, which was a golden period for the club and Serie A in general.

Back then, Parma were a force at home and abroad.

In addition, they won the UEFA Cup in 1995, beating a Juventus team containing Didier Deschamps, Roberto Baggio and Gianluca Vialli, while in 1999 Marseille were defeated as Parma lifted the trophy again.

It’s easy to forget how good they were and the talent they once had at their disposal, which you can see in the photo above, prior to beating Marseille 3-0.

In the final, which saw this goal from Enrico Chiesa, whose son Federico is now a Juventus player and starred for Italy in the Euro 2020 win, round off the win after earlier goals from Hernan Crespo and Paolo Vanoli.

The last goal scored by an Italian side in the final of the UEFA Cup/Europa League in May 1999.

Fabio Cannavaro also played in the side and recalled Asprilla’s craftiness – in avoiding player fines.

“I joined Parma when I was very young and the team back then really did play to win,” Cannavaro told Sky Sport Italia in 2020.

“I remember that Lorenzo Minotti, as captain, would write down all the fines that players had to pay for things they’d done wrong.

“When it was Asprilla’s turn to pay up, he stood up and ate the piece of paper with the list of fines.”