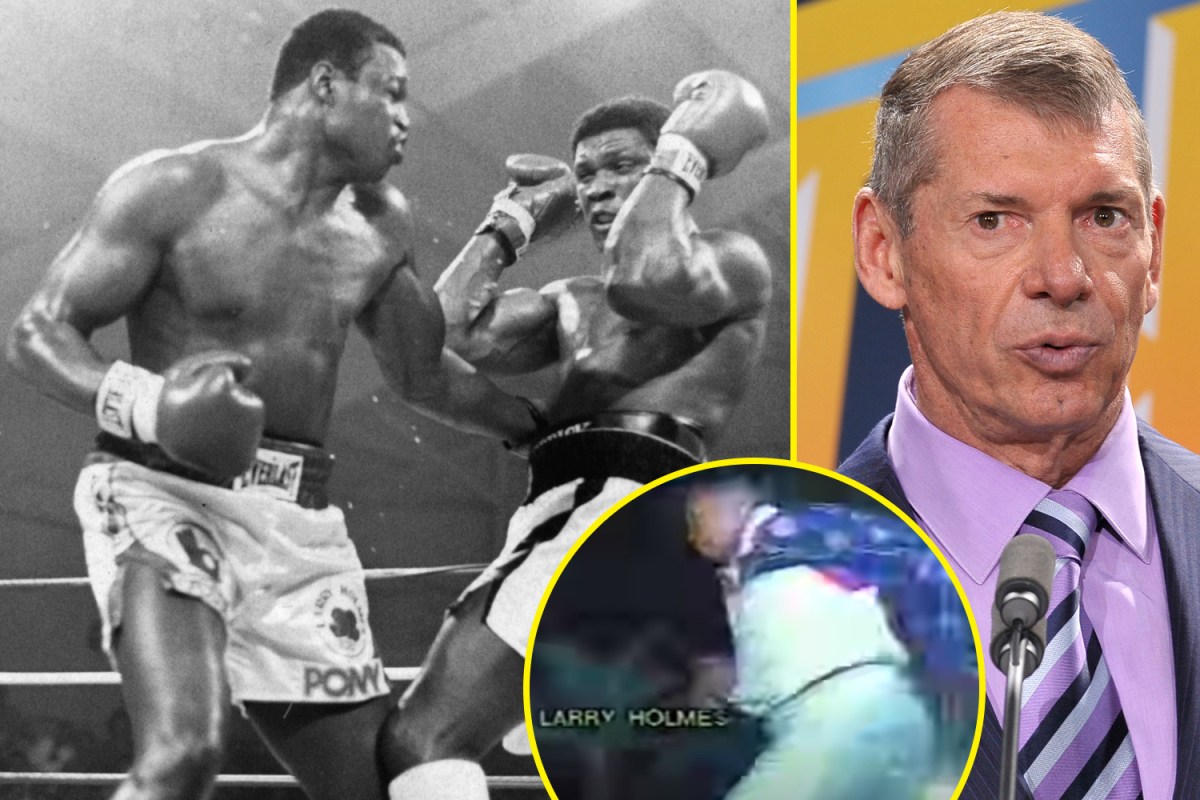 Larry Holmes is one of the greatest, most respected heavyweight champions of all time – so the sight of him destroying a rival by running over the top of a car to deliver a flying, WWE-style drop-kick in a street fight remains one of the wildest sights in boxing.

Holmes, who made 20 heavyweight title defences and fought everyone from Muhammad Ali to Mike Tyson, was a smart, 6ft 3in in-ring technician with a tremendous jab. So not the kind of man you imagine charging across a limousine roof in a bright white tracksuit then launching himself two-footed at Trevor Berbick – cutting through a hoard of police officers and onlookers like some dream combination of Eric Cantona and Macho Man Randy Savage.

Except that the TV footage exists and it’s astonishing, lacking only the commentary of Jim Ross (“As Gawd as my witness, Berbick is broken in half”) and WWE boss Vince McMahon (“What a man-uh-var!”) as the finishing touch. But how on Earth did two world heavyweight champions end up rolling around in a car park in their street clothes in 1991?

The bad blood stretched back to their in-ring meeting a decade earlier. Undefeated world champion Holmes won a clear 15-round decision in Caesars Palace, Las Vegas, but Berbick – a big pre-fight underdog – kept it competitive and surprised many by going the distance. He clamoured for a rematch, but didn’t reckon with it being a special, one-off, parking lot match-up 10 years later.

Holmes, who got to 48-0 before he ever tasted defeat, was in comeback mode by 1991. He’d lost his heavyweight crown to Michael Spinks across two close and controversial fights, then was stopped by a 21-year-old Tyson. But even at age 41, Holmes still had a fair bit in the tank and returned to winning ways by blowing out journeyman Tim Anderson in a round.

Then came a post-fight press conference way more entertaining than that bout as a sharply suited Berbick interrupted matters – in true pro-wrestling style – to demand a rematch and accuse Holmes, bizarrely, of ruining his marriage by sending a call girl to see him the night before they fought. With cameras rolling, Holmes – whose wife and children were at the event – understandably left the stage swiftly, but Berbick stayed to entertain the press.

“If you want a street fight, I’ll break all the ribs in his body,” hollered Berbick. “He used a sweetheart to mess up my whole married life! That’s why he don’t like me. Jenny from Jacksonville! I got proof and I got tapes… All the problems I have are through him. My kids are suffering too.”

Berbick had briefly held a version of the world heavyweight title five years earlier but lost it in two rounds to a 20-year-old ‘Iron Mike’, infamously stumbling around the ring in knee-high socks as he attempted to regain his balance. Little did he know that Holmes – silently fuming at what had gone on – was about to take him down in arguably even more spectacular style.

By the time the TV crew next caught up with Berbick, he was in the car park, his suit far more dishevelled and surrounded by police, accusing Holmes of assault. “Everybody saw him kick me and punch me!” he hollered. “Larry Holmes kicked me and punched me.” But there was no proof and Holmes had almost gotten away with the perfect crime – except that the ‘Easton Assassin’ chose this precise moment for the ultimate sneak attack: running over an entire stretch limo, before launching a midair strike in frankly heroic style for a man in his forties.

The only thing missing was Jenny from Jacksonville as his glamorous valet and Leisure Suit Larry hooking the leg as he pinned Berbick on the tarmac for the three count. Instead, police and screaming spectators battled to separate the pair. By the time it was over, Berbick’s suit looked more than ready for the dry cleaners – though remarkably no arrests were made or charges brought. Perhaps the watching law enforcement officers just assumed they had hallucinated the whole thing.

You could say it was out of character for Holmes, who had the misfortune of following in the footsteps of Ali (who had used young Larry as a sparring partner early in his career) as heavyweight champion. Holmes reportedly cried after he defeated a 38-year-old, damaged version of Ali in 1980 – but the public saw him as a surly, businesslike champion; a stopgap between the charismatic, breathtaking Ali and the brooding menace of Tyson.

That feeling of being undervalued gave Holmes a bitter edge which he never lost and helps explain why one of the more cerebral heavyweight greats ended up bounding across a car roof to go airborne at an ex-opponent. Certainly no apology was forthcoming. “I did not like him,” Holmes said years later. “He was just arrogant – no respect; no respect for my wife and family, my friends or anybody.

“I was a better boxer than him and my personality was better than his. So he wanted to act stupid and I acted stupid along with him, which I shouldn’t have done.”

Holmes fought on for another 11 years after his street fight with Berbick, losing on points to Evander Holyfield and Oliver McCall in world title challenges, but owning enough veteran smarts to pull off a few upsets, beating the likes of Ray Mercer. His final fight came in 2001 when the 52-year-old took on so-called king of the four-rounders Eric ‘Butterbean’ Esch, outboxing him over 10 rounds. After 75 fights across 29 years, only Tyson was able to stop Holmes.

Berbick tragically lost his life at the same age when Holmes finally retired, the 52-year-old murdered in his native Jamaica by his own nephew in 2006. Yet for a heavyweight title-holder whose reign lasted only eight months, Berbick had some unique career moments. He was the last man to defeat Ali in a sad spectacle in 1981, he was the opponent when Tyson became the youngest heavyweight champ in 1986 and his feud with Holmes has – if nothing else – delivered one of the astonishing, unforgettable street brawls boxing has ever seen.