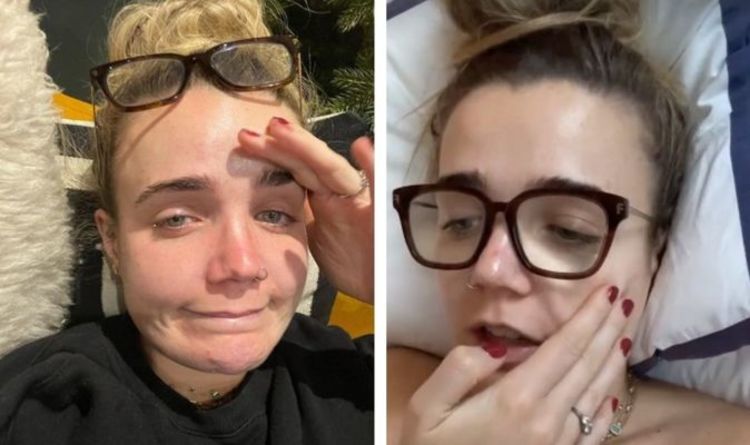 Earlier in the year, an airway problem forced doctors to break Emily Clarkson’s jaw in three places and reset it, but they now suspect an infection may have sneaked underneath one of the metal screws, leaving her bruised, swollen and miserable.

A frustrated Emily has posted updates on her Instagram page, admitting that she is longing for the dance floor.

However, it is looking increasingly likely that she will be confined to her home until next week.

“I thought it might’ve been the cold causing the metal plates that were put in during my surgery to make my face ache and seize up,” she explained in her Instagram post.

“[However] the pain this week has got progressively worse until yesterday when I found a bruise and today when it started spreading down my neck and swelling up again.

“I’ve been back in touch with my surgeon today and it sounds like I might have another infection underneath one of my screws which is f***ing INFURIATING.

“I just feel totally back to where I was earlier in the year.”

The “constant pain and uncertainty” have ground the start of Em’s weekend to a halt, although she would normally have been taking the opportunity to “dance my little a** off”.

However, her 227,000 followers were quick to post words of encouragement.

Instagrammer hollingworthdonna reassured her that even graphic stories involving dribbling had not deterred her from being supportive.

“Other people’s good news has me BEAMING and I’m totally warming my cold miserable heart by the warmth of everyone else’s happiness. Thanks for being the f***ing best lads.”

A tearful looking Em, who also lamented that her hair was plagued by split ends, later found the strength to post some positivity for her followers, reassuring those who weren’t out “drinking mulled wine and being merry” that they were not alone.

She posted a list of bullet points, including: “Crying is my sadness leading the body making room for happier things, so let the tears flow if they need to”.

“I’ve got through all of my darkest days,” she added.