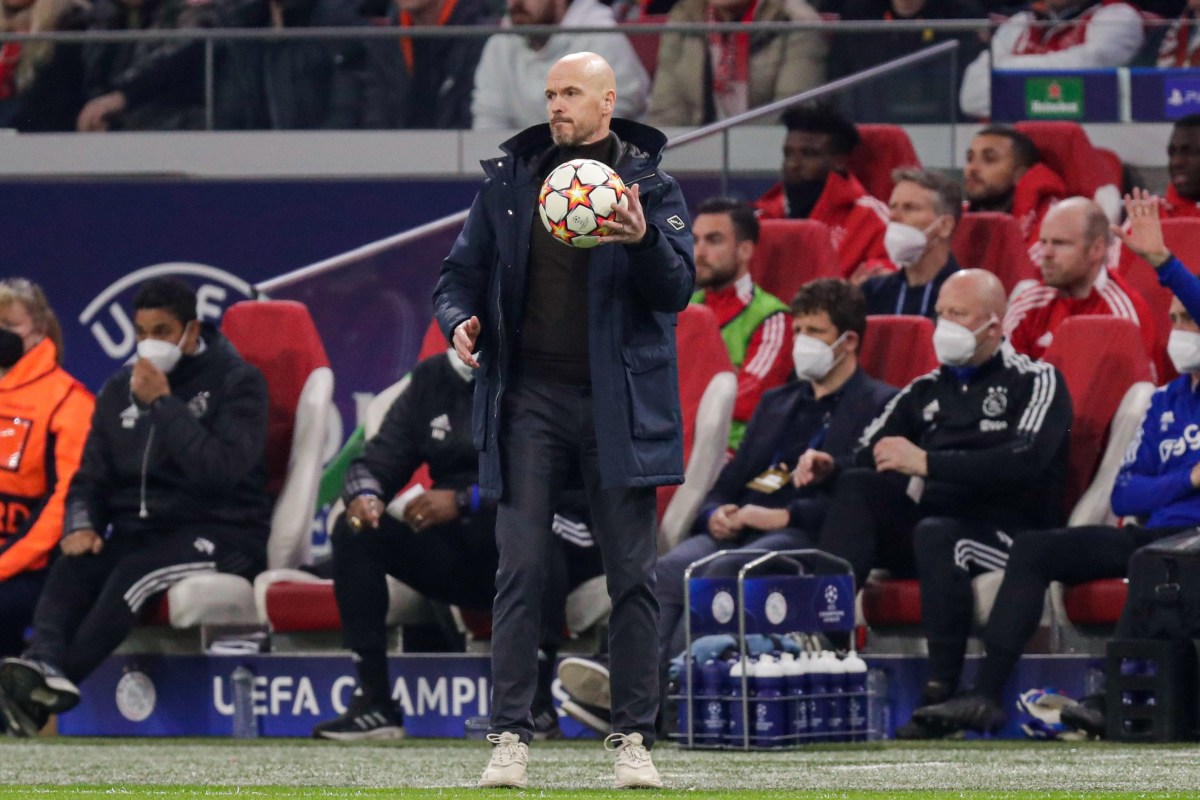 Erik ten Hag insists he is only focused on Ajax and not thinking about rumours regarding Manchester United’s managerial role.

The 52-year-old, who’s been in charge of Ajax since 2017, is heavily rumoured to take the hot seat at Old Trafford next season.

He recently spoke of his frustrations at Ajax’s policy of developing top players and then selling them.

He said: “The lifespan of our team has always been short in recent years.

“I understood – and still understand – the sale of players.

“But you can hardly cope with such bloodletting if you want to continue to play a significant role in the Champions League.”

And whilst he may be unhappy about the situation, Ten Hag insisted he is focused on his club and ensuring they have a successful season.

“I don’t think it’s today an issue, it’s about today’s game,” the Dutchman said to BT Sport when asked about his future before Ajax’s Champions League clash against Benfica.

“I focus on that, and I don’t pay any attention to other subjects, I only focus on Ajax vs Benfica.”

Pundits Peter Crouch and Michael Owen also gave their thoughts on the situation, with former Man United striker Owen saying the Dutchman is the ‘best candidate that could be available’ for the Old Trafford job.

“Yeah I believe so,” Crouch said when asked if Ten Hag will be a good fit for the Red Devils.

“It must be difficult for him, he’s just building a side, gets great young players and that’s ripped away from him.

“With the Champions League, almost getting to a final a few years ago [2019] and then most of the players leaving again, and same again now, a lot of them being touted again, it must be difficult for him.

“He’s a top manager and obviously Manchester United is a huge club for him to go anywhere, it would be a good coup for them and I think he’s making noises about moving on.”

“I can’t see Ajax getting any better in terms of winning a Champions League with the state of things at the moment, they simply haven’t got the finances to go and mix with the big boys of Europe,” Owen added.

“Of who is available at the moment, then I think he’s in pole position to be the next Manchester United manager.

“I think he ticks a lot of boxes and as we stand he’s the best candidate that could be available.”

With that said, his credentials may have taken a blow as like Man United, Ajax lost their last-16 tie as they fell to a 1-0 defeat at home to Benfica.

A late header from Darwin Nunez sealed the Portuguese side’s passage into the last-eight in a match that saw the wasteful home side have only tested the Benfica goalkeeper twice despite having 16 shots in total.

Benfica break the deadlock in Amsterdam! 😤

Onana comes out to try and catch Grimaldo’s free-kick, but it’s Darwin Nunez who pounces first and powers home a header.

A HUGE goal in the tie 💥#UCL pic.twitter.com/6WB90JCnH4