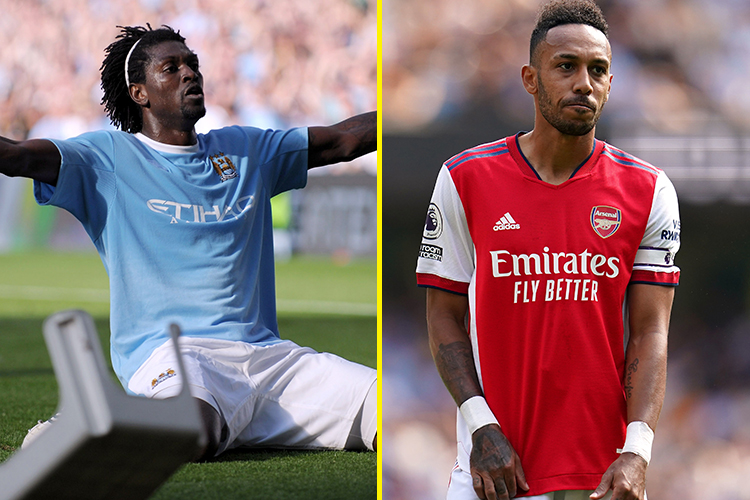 Emmanuel Adebayor is adamant there’s no way back for Pierre-Emerick Aubameyang at Arsenal, as he insisted Gunners fans ‘never know how to forgive’.

Adebayor found out first hand how to go from hero to zero with Arsenal supporters when he joined Manchester City from the north London club in 2009.

The former Togo international was a hit at the Emirates, scoring 62 goals in 142 appearances in four years at the club to make his name as one of the top strikers in England at the time.

However, his switch to City inevitably saw him become unpopular with Arsenal fans, who insisted he only joined their rivals for the money after they were taken over by billionaire owner Sheikh Mansour.

However, Adebayor became the ultimate figure of hate for his infamous celebration at the Etihad in September 2009.

After scoring in City’s 4-2 victory, Adebayor ran the length of the field to celebrate in front of the travelling Gunners fans in what was one of the most iconic moments in Premier League history.

Aubameyang, who was axed as Arsenal captain in December for a culmination of disciplinary problems, is facing an equally tough time at the club and Adebayor reckons there may not be a road back for his fellow African.

He said: “I know he’s definitely going to go through a lot because that’s Arsenal for you. You can’t do whatever you do.

“They never learn or they never knew how to forgive. So, I know he will go through a lot.

“I sent him a message already because we just want him to bounce back.

“He’s our African brother and we want him to keep representing Africa the way he was doing it before the problem.”

Adebayor was then asked whether he thinks there is a way back for him, to which he replied: “At Arsenal I don’t think so.

“This is what I know because it happened to me also. Not in the same way, but a way back? At Arsenal, I would be surprised [if he had a future].

“But as I’m telling you, he’s a great player so let’s see how he ends up.”