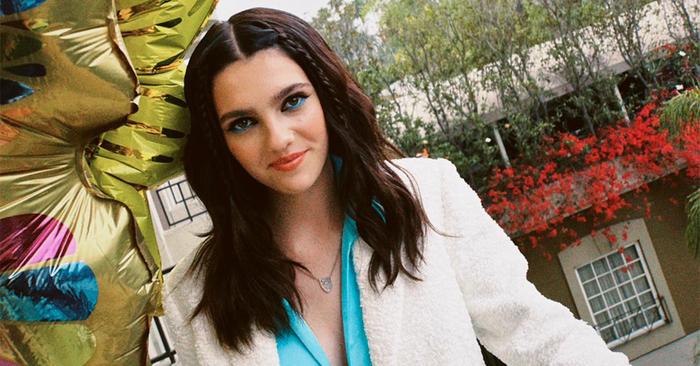 Take me into the mindset of Alicent. Princess Rhaenyra is her closest friend and confidant, and now she is stepping into the role of her stepmother. And while she may not have a ton of dialogue, it’s clear from her mannerisms and the way she carries herself that there is a lot of nervous energy going on.

It’s interesting that you say you can see so much on her face and how she holds herself and the picking. It’s because of so much that she wants to say but can’t, or feels she can’t, and it leaks out in little ways. It leaks out in a glint in the eye or a facial expression or the picking. She just cannot physically contain it all—it has to burst out the seams in some way shape or form. I work as a very immersive actor, so when I’m playing a character, my thought process disappears and I take on the character’s train of thought, if that makes sense. That’s how I work; I black out, and it feels very much like a switch between the two rather than a blend as some actors work. And so when I was in Alicent’s mindset, I found it very difficult to organize her thoughts because there was just so much going on at all times. I decided to journal. It’s something that I do on most jobs to help understand the depth of the character’s brain, and I think it takes it from being a character on a page to a three-dimensional human being. Because no one ever says constantly what they are thinking. There is always a stream of consciousness, and I enjoy having that on paper to look at. It was especially helpful in this instance because with such a long shoot, we’d do something in rehearsals or we’d shoot a scene in June and come back to the scene following that or before that in December, and it would have been very hard to jump around. So I would just read the journal [entry] of the day we rehearsed it or the day we shot the previous scene, and it would take me straight back into firsthand where my brain needed to be in that mindset. It was something that Ryan, especially more than anyone else, was incredibly intrigued by and he found it fascinating. He would sit and read it.

I remember in our story meetings at the very beginning, I had one-on-one character meetings with Miguel [Sapochnik] and Ryan and had never had that kind of creative freedom and had never been able to delve in that deep before. I came in with my folders and had every script printed out and highlighted and annotated with little tabs sticking out. They were like, “Whoa! This is great. What is going on?” And I was like, “This is how I work. This is what I do.” They were like, “Cool, let’s work with that then.” Miguel is amazing. He makes you feel like you are the only person he’s working with and the only person in the room. He’s very hands-on, and I loved that. The support we had and the rehearsal period felt like we were doing play rehearsals, which I started in theater, so, for me, it was a very comfortable environment.

Can you tell me about working with Milly Alcock and building that on-screen dynamic?

I think we were quite lucky that we didn’t hate each other. We just get along really well off-screen, and so that chemistry came very organically. Milly booked her role quite a while before I was cast, quite a while before I even auditioned, I think. And she had been asking for ages, “Who is playing Alicent?” And the second I found out I booked it, I asked, “Who is playing the other one? Who is playing the other young girl?” I wanted to know who Rhaenyra is. So we both, without knowing, asked our representatives to ask production who the other one was. We got each other’s emails, which is really weird and formal, so I Instagram-stalked her and DMd her and was like, “Hi! This is really weird. Can we talk because I don’t know about you, but I’m petrified,” and she was like “Me too.” We FaceTimed and were both like, okay, this is reassuring that we are both as scared as one another. [We were on completely] opposite ends of the world, but we were both going into this crazy whirlwind, life-changing experience together. And so we clung to each other and have not yet let go.

We worked a lot on the relationship with, of course, Miguel, but also with Clare Kilner who [directed episodes] four and five because that’s really where you see the difference in the friendship from where it’s been established into what we see it become and obviously the spark of what it’s then going to become when Olivia [Cooke] and Emma [D’Arcy] take over. But there’s just this closeness between them. I always say, at 14, especially as a woman, you think your best friend is going to be your best friend forever. There is no other option. That is your person. And it is almost like having a partner in that sense—it toes the line between platonic and romantic. At 14, you don’t know what those words mean, let alone what the feelings mean. It’s just this tactile closeness. I mean, girls at 14 are allowed to change in front of each other, they are not allowed to change in front of the boys, and they go to the bathroom together, and those things. There is just this bond. Exploring that was one of the most fun things to do on this job, and Milly made it so easy.

Olivia Cooke plays the older version of Alicent. Did you two have a chance to connect before filming to talk through the character?

It was blind, but we just had to trust the creative team. And as much as we trusted them, they put a huge amount of trust in us. We did go for lunch halfway through the shoot, but only because Liv is the loveliest human ever and messaged me to make sure I was okay. We just went for a catch-up, and we did not actually talk about the character at all. Ten years is a really long time, you know. It’s a long time in anyone’s life, but especially in Westeros where time moves so rapidly and the people around you change so quickly and the circumstances change so quickly. We see them grow from practically children to fully fledged women. There is a lot of growing up to do in those 10 years as well. So it was like we were playing different people. It’s, of course, the same character, but I don’t think anyone in their 20s looks back at who they were at 14 and thinks they are the same person. What was it that Emma said? At Comic-Con, they said [that] when they were watching Milly’s and my episodes, it felt like they were watching home video, like [a] Targaryen home video, and I think that’s such a sweet thing to say, and it makes sense. We haven’t seen Olivia and Emma’s episodes yet. I’m really intrigued to see how it’s going to be watching me, like my character, my Alicent, on screen in years to come. It’s a strange Back to the Future kind of thing.