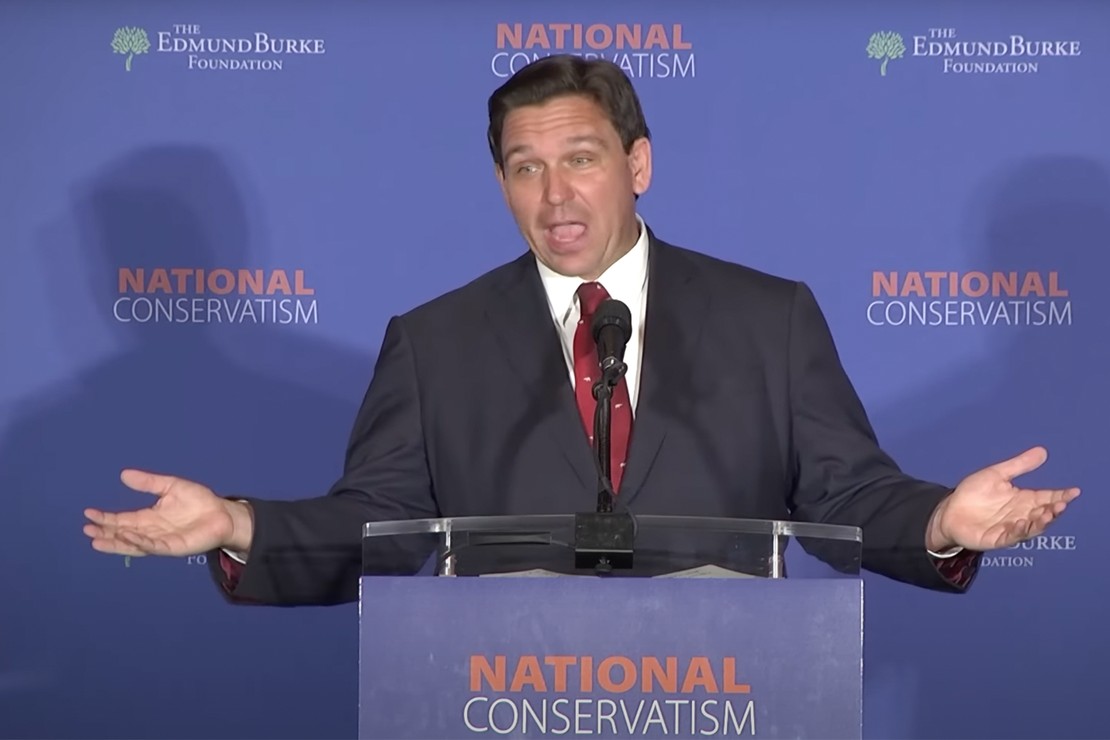 Ron DeSantis is running for president.

No, he hasn’t announced his candidacy or started flying off to Iowa or New Hampshire. But he is refining his pitch to voters, and I have to say he makes a strong case.

I admit that I am biased. I think Ron DeSantis is the smartest and most compelling Republican politician since Ronald Reagan. This is not a slam on former president Trump. Love him or hate him, Trump took a moribund Republican Party and created an entirely new political coalition that will endure long after he exits the stage. Trump deserves credit for a Republican rebirth and for exposing the fundamental corruption of our political and cultural ruling class.

Trump may have left office in 2021 battered, bloodied and politically wounded, but he did so having taken political ground that no Republican would ever have imagined we would occupy.

Plus Trump pruned the deadwood in the party. They have all gathered at The Bulwark, The Dispatch, and the Lincoln Project to talk to each other without bothering the rest of us. For that alone Trump should get a Nobel Peace Prize, at least if they meant anything real.

But in my opinion DeSantis is in a class by himself because he can build on Trump’s accomplishments, expand them, and solidify the new political coalition into something enduring.

For the past week the country has been riveted by the political drama of DeSantis’ move to fly illegal migrants to Martha’s Vineyard. Read the pages of Hot Air, watch any cable news, or if you can stand it read the editorial pages of the country’s newspapers and you see that DeSantis can set the agenda. President Biden can command moments of attention when he drools too much on stage, tries to shake the hand of some imaginary friend, or invents a new word or two by mumbling incoherently. But he can’t hold a candle to Governor DeSantis in focusing the attention of the country on an issue.

He’s really good at this politics stuff. So it’s no surprise that he is trotting out his pitch to the nation.

The Claremont Institute’s magazine The American Mind has reprinted DeSantis’ speech given in Miami at the National Conservatism Conference in September 2022, and it is well worth a read. In it the governor outlines a governing philosophy for the future, and points to the successes this philosophy has demonstrated in the free state of Florida.

“Since COVID, more adjusted gross income has moved into the state of Florida than has ever moved into any one state over a similar time period in American history.” – @GovRonDeSantis https://t.co/8jQ0Z66F7H

The philosophy in a nutshell? Governing is about statesmanship, not implementing technocracy. And by statesmanship I mean focusing on the wholistic well being of society and free people, not on satisfying some group of elite experts whose hobby horses need to be taken out and ridden to make them happy.

I look back at Dwight Eisenhower’s farewell address. Most people remember it for his warnings about the dangers of the military industrial complex, and I think those were very smart observations. But if you read that inaugural address, he talked about this new phenomenon of the federal government funding so much scientific research. And he said, when those two things are intermingled like that, there’s a danger: public policy itself could be held captive by what he called the “scientific-technological elite.” And he rejected that as something that was acceptable. He said, A statesman’s job is not to subcontract out your leadership to a very narrow-minded elite. The job of the statesman is to harmonize all the different competing interests that are in society, weighing different values, and then coming up with the proper policy. And so my view was, we had to choose freedom over Fauci-ism in the state of Florida.

We had to make sure that our policies weren’t excluding all these important values, just because people with a very narrow-minded view, with some credentials by their name, were telling us that those values didn’t matter. And a great example is when we were dealing with the schools, and whether schools should be open. The fact of the matter is, from a perspective of evidence and data, this was not a very difficult decision. But it was a very difficult political decision. Just in terms of the blowback that we got: we were opposed by almost every major health bureaucrat that would go on T.V., or that was on the White House task force, or in different state capitals. But the reality was, we had seen this go fine in other parts of the world. And we were following observed experience. And we put that ahead of what some intellectual elite thought should happen.

It’s hard to recall–or perhaps it isn’t for those of who shouted from the rooftops–how much courage it took to stand up to the experts and do the right thing. Every single political, cultural, media, and corporate leader out there put maximum pressure on dissenters and tried to crush them. Anybody who swam against that stream was mercilessly attacked, slandered, threatened, and censored.

If you opposed the technocratic and media elite you were targeted for destruction. It was scorched earth politics.

Even president Trump succumbed much of the time. He freelanced occasionally, but he stood next to Fauci and Birx and gave them the power to set policies for months. That probably cost him the election.

DeSantis didn’t set himself up as an expert and go toe to toe with them on their own turf, although he generally was more right about the virus’ trajectory than the actual medical “experts.” It was he who saved Florida’s nursing home residents by ignoring the experts and keeping COVID patients out of nursing facilities.

Instead DeSantis chose to set COVID policies based upon the good of society as a whole. He looked at the data. He put that in context of what is good for society, and did the right thing.

He chose statesmanship over technocracy. He became our champion David vs. the Davos crowd’s Goliath.

David slew Goliath, and by doing so set the stage for becoming King of the Israelites. That’s a pretty good metaphor for DeSantis’ rise, I think.

I will be examining DeSantis’ actual presidential pitch as outlined in this speech in several future posts, but I believe the core of it is right here — as the Claremont Institute put it, it’s DeSantis’ Florida vs Davos.