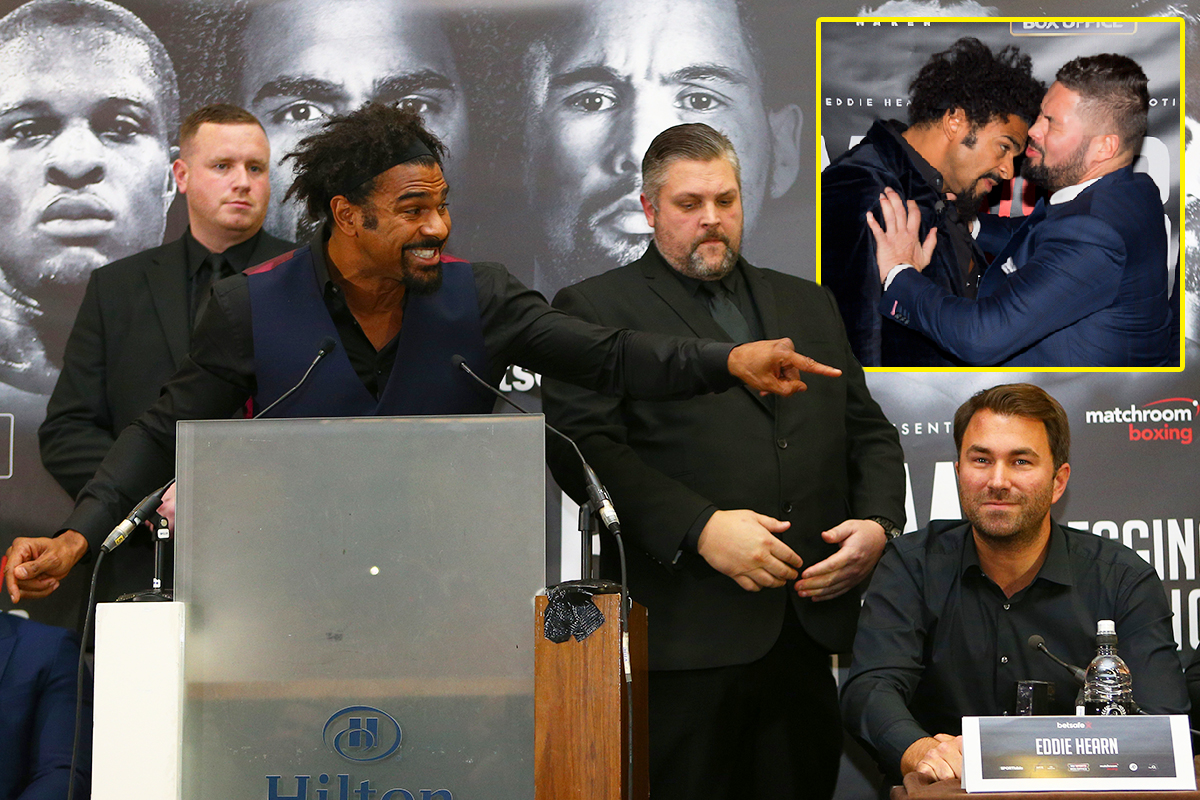 David Haye took aim at Eddie Hearn, Tony Bellew and Anthony Joshua in a classic press conference before his bout with Bellew in 2017.

In the build-up to the PPV fight, Haye took his moment to speak at the presser as an opportunity to launch a verbal attack on Hearn.

Haye began: “In the time that I’ve been out, I’ve been watching social media, watching YouTube to see what’s happening on the scene.

“And this fight gives me the opportunity to shut his big mouth.

“The reason why Tony believes I’ve got a load of diva-ish demands – we’ve got a list of things I want, ring, gloves, changing room.

“When it came to negotiations, the only thing Eddie really put his foot down on was that it was called, ‘Eddie Hearn and Hayemaker Promotions presents’ [with his name first].”

At this point Hearn interjected: “It was actually the split.”

But Haye replied: “No it wasn’t the split.”

Hearn said: “Listen, I’m pleased to be giving you the payday.”

To which Haye hit back: “No, no, no, no – the only thing you put your foot down on was putting your name first.

“Now, once again, you’re sticking your face out, it’s all about the Eddie Hearn show.

“I tried to watch a Katie Taylor interview the other day, really interested to see how she was, her first fight, really looking forward to it.

“She starts talking and you barge her out the way, ‘Ah, here we go, apples and pears,’ jumping around, clowning around.

“It’s not the Eddie Hearn show, you should be promoting your fighters. A boxing promoter promotes their fighters, doesn’t promote themselves.

“I’m more of a promoter in this than you are.”

“I’m talking to the press and you’re making it the Eddie Hearn show.”

Hearn replied: “You’re the only person that likes the sound of their own voice more than me.”

After a minute’s further bickering, Haye told Hearn: “I’d probably be working with Matchroom if your old man [Barry Hearn] was running the show.”

But Hearn hit back: “But you know what? You are working with Matchroom because you’ve got no choice because you need the dough.”

Haye said: “After I’ve taken out this guy, I’m gonna come back and take out Anthony Joshua and end your business.

“Matchroom’s gonna be over, trust me.”

After the press conference concluded, the fighters then squared up for a face-to-face.

Haye pushed his head into Bellew, prompting Bellew to shove him backwards.

As he did so, Haye threw a left hook and caught Bellew in the face.

In the fight though, Bellew pulled off a massive upset as he KOd Haye who suffered an Achilles injury midway through.

In their rematch a year later, it was a repeat result which brought about Haye’s retirement.