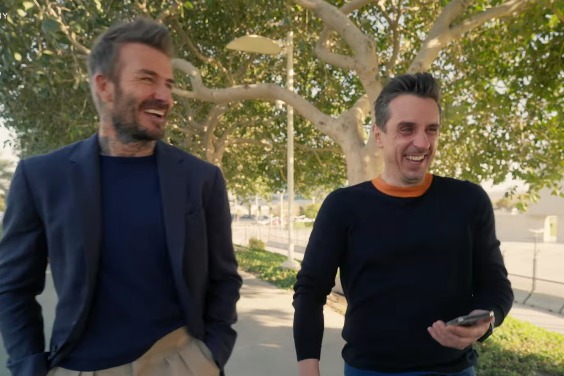 David Beckham has revealed all about a storied playing career during a one-on-one interview with good friend and fellow Manchester United legend Gary Neville.

The pair of United icons played together for 11 years at Old Trafford after they were given their debuts by Sir Alex Ferguson in 1992.

Winning a flood of trophies along the way in one of the greatest teams the game has seen, the duo dominated right wings across England and Europe, creating a bond that is still clear today.

Appearing on Neville’s Sky Sports show, The Overlap, Beckham was asked 29 questions by his old colleague, with some easier to answer than others.

His best goal was an easy choice, until Neville intervened…

“Greece, the goal against Greece,” Beckham said with some certainty thinking back to his 2001 curler that sent England to the World Cup.

“Not the halfway line one?” Neville replied.

Next up was his world famous haircuts that continually made the headlines throughout a career where the former Real Madrid and AC Milan winger became a global celebrity.

After saying the skinhead was his favourite, Neville asked Beckham his most controversial, with hilarious results.

“You tell me…” Beckham responded. “You know that, probably the mohawk, it lasted until the gaffer saw it, then it had to go, then he made me shave it in the changing room.

“Mohawk and probably the cornrows… Nelson Mandela [met me with them]… I had those done in the south of France when I’d had a glass of Rose.”

The duo won 12 trophies together at Old Trafford whilst playing on the same side of the pitch, so you’d think they’d have linked up pretty often…

“How many of Gary Neville’s 35 Premier League assists were for David Beckham?” the former right-back asked.

Beckham pondered: “Quite a few I’d say…” Before the real answer was revealed and he responded in shock: “One?!”

The Inter Miami owner was then asked which player he wished he could have played with, and revealed a fact that even Neville didn’t know.

“Bobby Charlton,” he said. “He was my dad’s hero, that’s why my middle name’s Robert.”

And which player he would choose for a last-minute matchwinning free kick? The answer was again instant.

“Zidane, Zizou,” he said without hesitation.