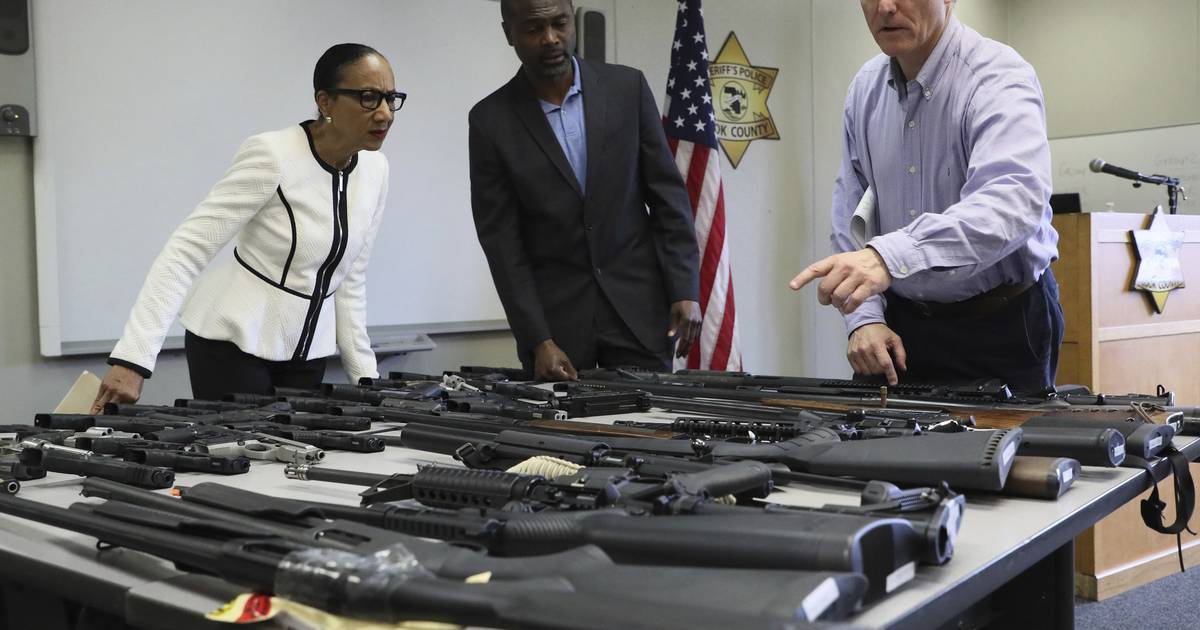 Amid an era of heightened concern over violence, Cook County Sheriff Tom Dart’s opponents in his reelection bid have been trying to paint him to voters as a soft-on-crime boss who has been in the job too long — but most of them need to get back on the ballot first.

The Democrats who have launched campaigns for sheriff are using the issue of crime to hammer Dart and argue they can make greater strides in reversing recent trends that last year led Cook County to see its highest number of gun homicides since the 1990s, according to the county medical examiner’s office.

However, two of the three hopefuls have been removed as candidates in last-minute court decisions, including one as recently as Wednesday.

The back and forth about who is on and who is off the ballot has become a centerpiece of the sheriff’s race, in large part because Dart has led the charge to have his challengers’ names removed from the ballot.

Dart stands by his maneuvers to disqualify rivals and said he has done what he can to tackle shootings and other crimes in Cook County.

“We’ve done a very good job to deal with the violent issues that are within our purview,” Dart said in an interview with the Tribune.

He noted he has added a new police command post downtown and continues to keep officers patrolling in the Austin neighborhood, which he said has curbed homicides in the neighborhood.

That is on top of what he said are efforts he’s pushed both inside and outside the jail to address underlying drivers of crime through mental health and substance abuse programming as well as employment support. For example, since 2019 some individuals found possessing or using drugs have been diverted from arrest and sent to a sheriff’s treatment response team that offers recovery services.

Dart then quipped, “Now, could my opponents say, ‘Well, crime is going up in Indiana and you should be doing something about that?’ Yeah, they can do that.”

A former state legislator who has been sheriff since 2006, Dart has the Cook County Democratic Party’s endorsement and far more campaign funds. Running to unseat him in the June 28 primary are Carmen Navarro Gercone, the executive clerk of court operations and administration at the Cook County Circuit Court clerk’s office who previously was Dart’s assistant executive director; Noland Rivera, a Chicago police sergeant whose wife was a Cook County correctional officer who died of COVID-19; and Dolton police Officer LaTonya Ruffin, a former sheriff’s employee who sued Dart in 2011 after being fired for allegedly giving incorrect statements about failing to secure her service weapon.

Both Navarro Gercone and Ruffin were knocked off the ballot after being deemed ineligible to run under separate Illinois appellate court rulings in the last two weeks. Navarro Gercone’s campaign has vowed to appeal the decision to the state Supreme Court.

The challenges came from Dart’s campaign even as the incumbent has kept a low profile in the months leading up to the primary. His effort to disqualify Navarro Gercone by using a little-known provision in the sweeping state criminal justice reform legislation that passed last year, also known as the SAFE-T Act, has received the most attention.

“I was qualified enough to run the second-largest department under Tom Dart’s administration,” Navarro Gercone said during a candidate forum that Dart did not attend. “But when it comes to running for sheriff, he didn’t want competition, plain and simple, and he thought I’d back down.”

Dart, who has said he did not know about the new requirement until after the law was signed, scoffed at Navarro Gercone’s characterization of why he mounted a challenge against her candidacy.

The sheriff’s office has a $631.5 million budget and about 5,400 employees who work in various departments, including Cook County Jail, overseeing security at the courthouses or a police department division that patrols unincorporated areas and certain municipalities.

But the sheriff’s electronic monitoring program — which takes up just 4% of its budget and has about 120 filled staff positions — has become a central campaign issue. As fears about crime have spiked, the program that sends some defendants home with an ankle monitor to await their trials has become a third-rail political issue.

While electronic monitoring is run by Dart’s office, Cook County judges make the decisions on which defendants participate. Originally designed to reduce overcrowding at one of the nation’s largest jails, the program has been blasted by Dart’s opponents — and Dart himself — for releasing too many defendants with violent or gun-related charges, they say.

Dart has maintained he has no control over how the makeup of its population shifted to include more individuals facing such charges after the county′s 2017 bail reforms, according to his office’s data.

“There definitely needs to be a complete reform to electronic monitoring,” Navarro Gercone told the Tribune, saying she will open up more “conversations” with the courts to do so. “Violent offenders will have no place in my administration’s electronic monitoring program. … That is something that I am willing to go to battle on.”

Rivera concurred. He also vowed to slash 300 top-level positions that he says are “redundant” in order to hire 3,000 rank-and-file employees to beef up the staff that oversees electronic monitoring, among other departments under the sheriff. He nodded to the 341 electronic-monitoring participants who the sheriff cannot locate as one reason for that need.

Dart said to both, “I find that fascinating and interesting because it speaks to some people being ill-informed.”

He argued his hands are tied because the County Board of Commissioners sets his budget, the judges are the ones who make electronic monitoring assignments, and he was sued in 2018 for briefly refusing to allow certain defendants to be released into the program.

Meanwhile, Chief Judge Timothy Evans has responded to calls to stop letting accused gun offenders out on electronic monitoring by reminding critics that no matter the charge, pretrial defendants are presumed innocent. And since bail reform began, 3.4% of people charged with felonies who are let out of jail before their trials pick up a new violent charge while released, according to end-of-2021 statistics from the chief judge’s office.

About 28.4% of the sheriff’s electronic monitoring population was there because they were charged with a violent crime, the chief judge’s data shows. In total, the sheriff’s office records about 2,300 people are currently ordered into the program, down from a peak of more than 3,600 last year.

Both Navarro Gercone and Ruffin say Dart’s administration has a penchant for racking up litigation and internal probes that are costing taxpayers millions and indicative of deeper ills in the sheriff’s office.

They cited a class-action lawsuit from more than 500 female correctional officers alleging management tolerated aggressive sexual harassment from male detainees at the county jail as well as a court ruling that the makeup of the sheriff’s Merit Board, which is in charge of meting out discipline, was unlawful. The latter finding was followed by an ex-employee who was accused of misconduct ultimately netting a $5.6 million payment from the county.

“Nothing’s being done; the women don’t feel safe,” Ruffin said about the first lawsuit, which Dart’s office has responded to by saying the administration does all it can to ensure a safe environment.

Rivera said these internal disputes arose from Dart being what he said was an “absentee sheriff.” But the longtime incumbent said he thinks he has a “very good relationship” with most employees.

“I would suggest to you objectively, I’m probably the most hands-on sheriff ever,” Dart said. “I’m very happy in this job. I have no desire to run for anything else.”

Then there is the ongoing joint investigation by Dart and the FBI over whether sheriff’s employees collected a county paycheck while working side jobs or not at all, as first reported by the Tribune.

Dart told the Tribune he found out about the alleged wrongdoing when a “handful” of staffers appeared to take advantage of a pause in using their thumbprints to clock into their shifts due to the COVID-19 pandemic.

He said he has proved his ethics are clean, nodding to his office being the first to be found compliant with the Shakman decree, a court order forbidding political patronage in government.

“I caught them,” Dart said about the employees undergoing discipline. “I was the one that’s pursuing it.”