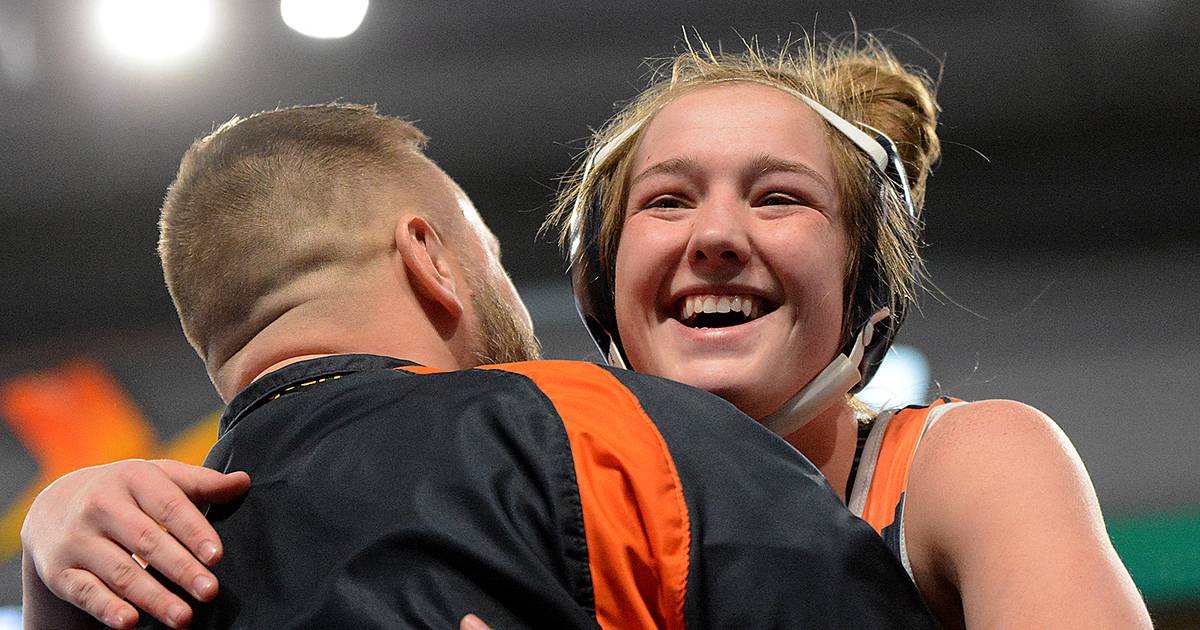 CORALVILLE — Colfax-Mingo has one of the best girls wrestling programs in the state.

And the Tigerhawks remained near the top this past weekend, bringing home another team trophy and runner-up finish during the Iowa High School Girls State Wrestling Championships at the Xtream Arena.

Colfax-Mingo brought 12 wrestlers to the tournament, six of them left with state medals and two others were a few controversial calls away from a podium finish.

Waverly-Shell Rock defended their title with 219 points and Colfax-Mingo was a distant second with 159. The Tigerhawks trailed the Go-Hawks by one point after the first day.

“The girls did great. I am proud of them,” C-M wrestling coach Erin Hume said. “You always think about what you could have done differently whether it’s this tournament or another one. Ultimately, the girls wrestled as well as they could.

“It was a whole team effort to get second place. They put it all out there. They did everything right all year.”

It was the third top-three finish in the four years of the event and the second time Colfax-Mingo ended up second, matching the 2019 team that did it when the tournament was in its infancy and took place at Waverly-Shell Rock High School.

And if it weren’t for the two controversial matches, one of which was against a wrestler from Waverly-Shell Rock, the Tigerhawks would have finished even closer to the Go-Hawks.

“We ended on a good note. We wrestled well and we deserve it,” Mariah Webster said.

Webster (18-3) was third at her weight class for the second consecutive season. She was 5-1 for the tournament with four wins coming by pin.

Her only loss was a 6-4 decision against eventual champion Hannah Rogers of Wilton. Webster was down in a few matches along the way but rallied to secure her spot in the semifinals. She won her third-place match 8-6 in SV-1.

“I would rather be at the top of the podium but third place is still good,” said Webster, who ends her career with three state medals. “Once I got past the loss, I just knew I had some matches left to win if I wanted to get third again. It wasn’t easy but I just had to push through.”

Webster found a way to win after trailing in more than one match at the state tournament. As long as there is time on the clock, she feels like she is never out of it.

“I am never done until the last seconds,” Webster said. “I will go 100 percent until the match is over. I just said I have to do this. I wanted to exit this tournament with a win.”

The six podium finishes ties a program-best for the Tigerhawks. Webster was joined on the medalist stand by Katie Schlosser, Maggie Schroeder, Kylie Doty, Danica Linn and Lily Webster.

Baxter’s lone representative in the field was Zoey Gliem and she went 0-2 at 120 pounds.

After Mariah Webster, C-M’s next best finisher was Schlosser, who placed fourth at 170. She was 4-2 for the weekend with four wins by pin.

“I was expecting to do a little better, but I beat the only girl who beat me coming into the tournament,” Schlosser said. “That was a goal of mine if I had that opportunity.”

Schlosser (20-3) used last year’s disappointing finish at state as motivation this time around.

“After not placing last year, it encouraged me to do a lot of preseason tournaments, workouts and I competed in a lot of different places in the summer and worked hard in season, too,” said Schlosser, who is now a two-time state medalist. “I’m not disappointed in my results.”

Schroeder (21-4) was fifth for the second consecutive season, this time at 155 pounds. She was 6-2 overall with five pins.

Schroeder trailed her opponent in the fifth-place match 10-2 but rallied to win by fall after locking in a cradle.

Schroeder, a three-time state medalist, didn’t think she had the cradle tight enough and was especially surprised when the official slapped the mat.

“It feels great to win a match that your losing in,” Schroeder said. “I put her in the cradle but I wasn’t sure if I got it tight enough. She started kicking really hard so I thought I was going to lose it. When (the official) slapped the mat, I was just so excited. I didn’t think I was going to win that match.”

Schroeder’s effort down big wasn’t the only time a Tigerhawk wrestler rallied from a deficit. They didn’t win every close match in the tournament but had several come-from-behind victories that secured medals or moved them up the podium.

“You are allowed to wrestle for six minutes. If you do, you’ll always have an opportunity to win,” Hume said. “We saw that three or four times where we needed the full six minutes to win the match. They just competed and always gave themselves a chance.”

Doty (19-6) is now a four-time state medalist after placing sixth at 130. She was 5-3 for the weekend and won five times by fall. Her final two matches ended in close losses.

Linn and Lily Webster both finished eighth at their respective weights.

Linn (18-4) was 4-3 at 125 pounds, winning twice by pin. She was fifth at 113 a season ago. Wrestling up a few weight classes definitely factored into this year’s finish. She was around six pounds lighter than the other competitors in her bracket.

“I got another medal but I was hoping for a little bit better,” Linn said. “Going up a weight class was interesting. It gave me more of a challenge.

“It was cool to be able to still show up and medal against girls who are bigger and stronger than me. It gave me a little more confidence actually.”

Lily Webster (13-9) was eighth at 100 pounds in her first high school season. Weighing around 90 pounds, the undersized Webster was 3-3 with three pins on the weekend.

Frier and Vry both were one win away from the podium. And each Tigerhawk suffered controversial endings to their careers.

Frier was 3-2 with three pins at 135. In her second loss, she was leading Vinton-Shellsburg’s Rachel Bane 9-6 in the third period but had to go to overtime after the official called her for three stallings in the final 30 seconds.

Vry (15-8) was 5-2 with five pins at 145. Her final loss came in overtime against top-seeded Haidyn Snyder of Waverly-Shell Rock.

In that match, Vry led Snyder 2-1 in the closing seconds but was called for stalling with under 5 seconds to go in regulation.

Colfax-Mingo’s senior class goes eight deep. Mariah Webster and Doty have been around all four years and were a part of three team trophy finishes. The rest of the group joined the team somewhere along the way.

“They are an awesome class. Losing them is going to suck,” Hume said. “They have embraced wrestling from the beginning. Kylie and Mariah did a great job getting their friends to come out.

“It’s been so much fun. Some of them started out with no experience and have improved so much. They put in the work to get the medals and trophy they got today. This is a special group and I hope it makes other kids back home want to try wrestling and be a part of something like this.”

“I was the first girl to commit to Iowa Central,” Schlosser said. “It’s a first-year program. I will be studying photography and general studies there.”

Schlosser has found a passion in sports photography. When she’s not competing on the mat, she was seen taking photos of her teammates throughout the season, including at this year’s state tournament.

“I just really enjoy capturing those moments. Not a lot of parents can get mat side to take pictures so I do what I can to get them shots,” Schlosser said. “And it gets me into my game mode. When I am up close and can see the action, it helps remind me what I should be doing when I am out there.”

Notes: After Waverly-Shell Rock (219) and Colfax-Mingo (159), the rest of the top five in the team standings were Osage (135), Bettendorf (133) and Decorah (124). Eight schools scored more than 100 points. … The Tigerhawks also had six podium finishes in 2019, which was the first season in which the girls state wrestling tournament took place. Colfax-Mingo finished second that season, too.