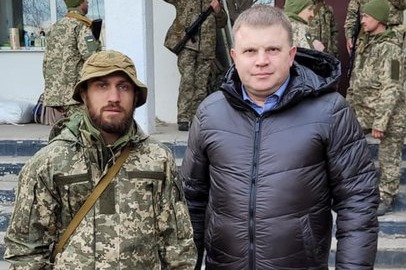 Vasyl Lomachenko has taken up arms to help defend Ukraine from Russian invaders.

The pound-for-pound boxing superstar has been pictured with an M16 assault rifle, having joined the Belgorod-Dniester Terror Defence Battalion in his hometown.

The two-time Olympic gold medallist and former three-weight world champion has returned to the south area of Ukraine that he was born in to join the resistance.

On his official Facebook page, Lomachenko posted a photo of himself dressed in military uniform with a rifle alongside the caption: “The Belgorod-Dnestrovsky Territorial Defense Battalion has been formed and armed.

Despite their status and fame, they have all decided to stand and fight for their country.

The Klitschko brothers have called on the world to show their support for Ukraine as they announced they had no option but to take up arms.

Vitali Klitschko, 50, is the current Mayor of Kyiv and has revealed he will serve Ukraine in war.

His brother Wladimir, 45, has also signed up as a reserve for the territorial forces.

Wladimir said: “I’m calling to all international partners to observe this strategy that is happening nowadays in Ukraine and this senseless war which is not going to have any winners, but losers.

“I just want to tell you we must stay united against this Russian aggression. Don’t let it continue happening in Ukraine, don’t let it happen in Europe and eventually in the world.

“United we are strong. Support Ukraine. Thank you.”

Heavyweight champion Oleksandr Usyk – due to rematch Anthony Joshua in the coming months – has also returned to Ukraine as they fight Russian aggression and vowed to join the defence.

He had this message: “I’d like to speak to the people of Russia. If we consider ourselves as brothers, orthodox ones. Do not let your children to set out to our country, do not fight with us.

“Also I’m addressing this to the President Vladimir Putin. You can stop this war. Please just sit down and negotiate it with us without claims.

“Our kids, wives, grannies are hiding in the basements…

“We are here in our own country, we cannot do it other way – we are defending… Stop it! Stop this war.”