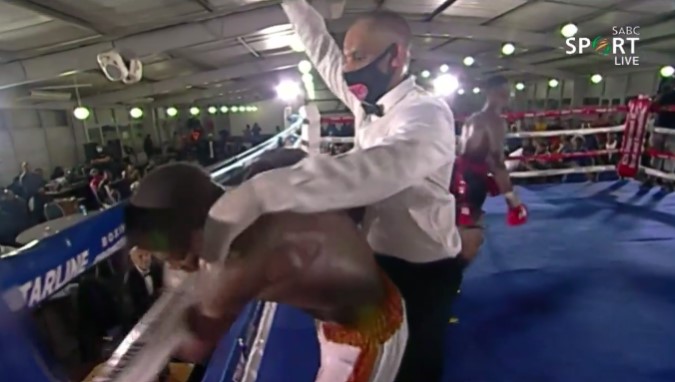 South African boxer Simiso Buthelezi has died in hospital after suffering a brain injury during his defeat on Sunday in Durban.

The lightweight contest ended in disturbing circumstances as Buthelezi had to be stopped by the referee for throwing punches at thin air and seemingly fighting an invisible opponent.

In the 10th round, Buthelezi was in control of the fight and forced his opponent through the ropes during a seemingly innocuous exchange.

However, replays showed Buthelezi took a strong jab to the chin from his opponent before he fell and briefly slumped onto the ropes.

When the action resumed, Buthelezi then appeared to lose his bearings.

Instead of walking towards his opponent, he directed his attention towards the referee, and didn’t appear to realise when the official moved out of the way.

He was left staring at an empty corner of the ring and swinging punches at an invisible opponent.

The referee immediately stopped the fight as a result and Buthelezi was taken to hospital.

He was initially put into an induced coma, but on Wednesday it was announced that he had died.

“It is with great sadness for Boxing South Africa and the Buthelezi family to announce the passing away of Mr. Simiso Buthelezi who passed away last night the 7th June 2022 at hospital in Durban,” read a joint statement.

“The Buthelezi family and Boxing South Africa acknowledges warm words of condolences of the Minister of Sport, Arts and Culture.

“The Buthelezi family and Boxing South Africa will in due course make announcement on funeral arrangements.

“Boxing South Africa and the Buthelezi family wishes to request members of the public and the media to give them space while mourning the passing away of this great boxer who was exemplary both outside and inside the ring.”