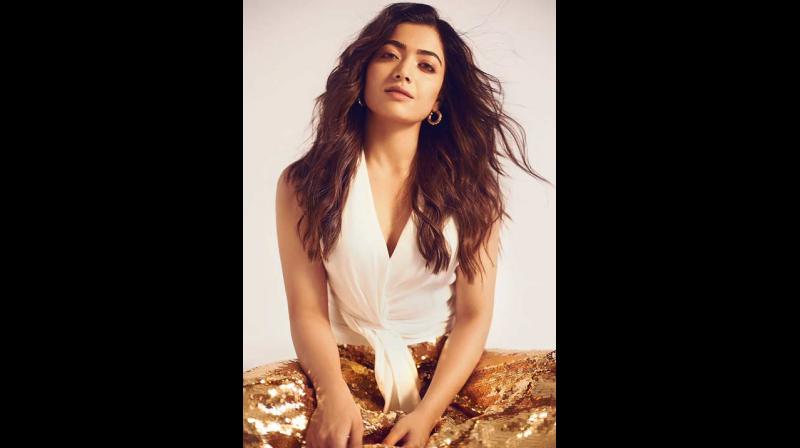 Rashmika Mandanna, who has become a household name after the super success of Pushpa: The Rise, aims to be known as a pan-India actress.

The actress has been active both in the Hindi and in the South industries and has been living out of suitcases for a while.

She was in Hyderabad recently for a narration, and to promote her upcoming film, Adavallu Meeku Joharlu. Talking of Pushpa, she says that the film validates the fact that people welcome engaging stories irrespective of the language.

Like in her earlier films Geetha Govindam, Chalo, etc., the trailer of her next film, Adavallu Meeku Joharlu, directed by Kishore Tirumala, shows Rashmika bullying her co-star. “I think I am born to bully my co-stars on screen,” she laughs.

But is Rashmika a bully in real life? “No way! I don’t bully people at all. But somehow I get such characters, maybe because of my eyes. Perhaps they give such an impression,” she quips.

She says one of the reasons she signed the film was that the narration made her laugh.

Rashmika finds it  refreshing to see so many women like Radikaa, Khushbu and Urvashi on the sets. She says working with such great actors taught her how to conduct herself on the sets and how to treat others on the team.

“Hindi is like any industry to me. I look forward to doing impactful roles and giving my best. Language has never been a barrier because I always enjoyed doing roles in various languages,” she says, adding that travelling and working in multiple industries gave her the opportunity to speak in various local languages.

“I talk in Telugu when I am in Hyderabad; next day I speak in Kannada, and when I go to Mumbai I speak Hindi. But all this is happening because I have an efficient local support staff,” the actress says, adding being organised is the key. Rashmika is also hoping to dub her lines for her Hindi films.

Earlier, it was very difficult for south actors to get into Hindi films. Have the times changed? “I feel when you do the right film and feel right about yourself that’s when things work,” asserts Rashmika.

She believes that her films in the south gave her great visibility in Hindi. “People call me Srivalli (from Pushpa) or Geetha (from Geetha Govindam), etc. So the audiences remember my characters, which means they are watching all our content,” she says.

But has foraying into Hindi cinema, changed the way she looks at scripts?  Is she looking for more scripts that have pan-India appeal? “Even if it’s not a pan-India subject, people from all over India will watch you because of the digital content that people are consuming,” she maintains.

Interestingly, the actress has been doing films in various languages from a very early stage of her career. “I don’t want to be categorised in any industry like North or the South. I want to be an actor with a pan-India appeal,” she says.

Meanwhile, the actress, who says she likes travelling, has rented a new house in Hyderabad, as she felt her old house didn’t have the space she needs.

Rashmika feels that women’s stories were always there, but women are getting good exposure now.

“Because of the exposure and reach, I think writers and filmmakers are more confident about bringing out women-oriented stories and write authentic roles. It’s an amazing feeling when your content reaches out to a wider audience,” the actress says.

And what does she have to say when people call her National Crush? She says it’s a validation of her hard work, and people’s love and affection.

“As an actor I sleep and wake up to films; I have been working in multiple industries and have been running from pillar to post for my shooting. So when people own me and say such nice things, it gives me a lot of inner strength and energy,” she asserts.