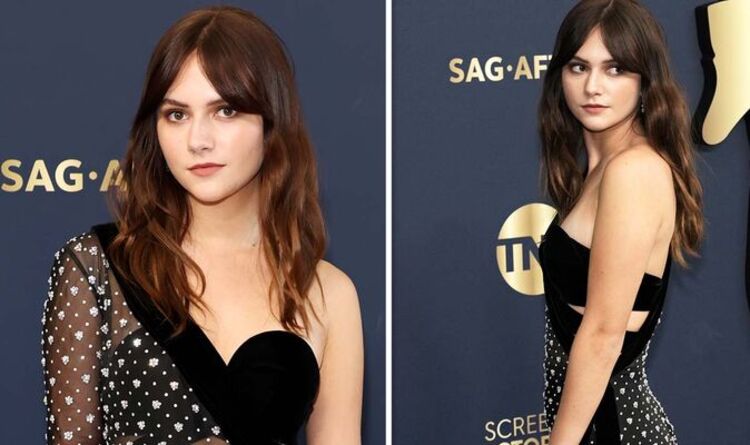 Emilia Jones, 20, wowed at the Screen Actors Guild Awards on Sunday night in a custom-made Givenchy gown. The brunette’s asymmetric dress was completely sheer and adorned with hundreds of diamantes and a thigh-high split.

The CODA star let her natural beauty shine through with a simple smokey-eye and nude lipstick.

Her brown hair was styled in loose waves with her fringe parted to perfectly frame her face.

READ MORE:Paul McCartney’s daughter claims there are ‘different sides’ to him

The Apple TV+ coming-of-age film stars Emilia as Ruby, the only hearing member of her deaf family.

The movie won Outstanding Performance by a Cast in a Motion Picture, becoming the first film with a predominantly deaf cast to receive the award and beating the likes of House of Gucci and Don’t Look Up.

CODA has landed multiple nominations in this year’s awards season including the BAFTAs and The Academy Awards.

Speaking to the Hollywood Reporter on the red-carpet before the ceremony kicked off, Emilia said, “It would mean the absolute world” to win the award.

The 20-year-old is the daughter of Aled Jones and his wife Claire Fossett.

Emilia has previously described how “supportive” her parents have been of her career.

She told PA that upon hearing the movie had been nominated for a BAFTA, her father text his wife and said: “What the hell she’s done it!”

The actress explained: “They’re so supportive and they’ve sacrificed a lot for me to do this so I’m very grateful to have them.”

Discussing her breakout role, Emilia said: “I’m just so grateful that people loved CODA because I did work so hard.